Not only were we there, but so was Dr. Doris Brougham 彭蒙惠, possibly Taiwan’s best-known missionary and English teacher – famous for her Studio Classroom English classes through ORTV, and for her trumpet playing and very lively personality.  She’s now 89, and has been in Taiwan since 1951, and is still dancing, singing, playing her trumpet and sharing her faith.   Amazing!  Her music group, Heavenly Melody 天韻 led the worship and she joined in with her trumpet, ah it was wonderful!

And so it was that we had a very entertaining, challenging and of course, a very moving evening!

During this past summer, a group of 16 students and leaders from St. John’s University Student Fellowship and Advent Church took part in an overseas mission trip, organized by the father of one of our students, Rev. Francis Shih, who helps to run the Taiwan branch of GLEC, known in Chinese as 普世豐盛生命協會.   The initials stand for ‘Global Life Enrichment Center’ ~ their original vision was to share the Gospel with post-Communist nations, now expanded to include all sorts of ministry in all sorts of places….

So last night was their annual Taipei Thanksgiving Dinner; in the last few weeks they had also held similar events in Taichung and Kaohsiung.  Our group was invited, and as we had 2 tables, the extra places were filled with student fellowship and church members.  GLEC also especially wanted mission workers to attend, so I went too, and we were given a round of applause at the end for our service to Taiwan!  We joined 300+ others, from churches and mission organizations all over Taiwan.  The banquet was held in a restaurant usually used for wedding receptions, so hopefully the restaurant staff had a pleasant surprise – the waiters certainly enjoyed joining in with some of the action worship songs!

The first Presbyterian Missionary to Taiwan was James Laidlaw Maxwell, and extracts of his Wikipedia entry are copied here….

Maxwell studied medicine and took his degree at the University of Edinburgh in Scotland. He worked in London at Brompton Hospital and at the Birmingham General Hospital. He was an elder in the Broad Street Presbyterian Church before being sent to Taiwan by the Presbyterian Church of England (now within the United Reformed Church) in 1864. He donated a small printing press to the church which was later used to print the Taiwan Church News.

On 16 June 1865, he established the first Presbyterian church in Taiwan, this date now celebrated by the Presbyterian Church in Taiwan as its anniversary. First his mission centred in the then-capital Taiwan Fu (now Tainan City); in 1868 he moved near Qijin (now part of Kaohsiung) where his work, both medical and missionary, became more welcomed. In early 1872 he advised Canadian Presbyterian missionary pioneer George Leslie Mackay to start his work in northern Taiwan, near Tamsui.

He married Mary Anne Goodall (died January 1918) of Handsworth on 7 April 1868 in Hong Kong. They had two sons, John Preston and James Laidlaw Jnr, both of whom later also became medical missionaries. He retired in London in 1885 where he formed and became the first secretary of the Medical Missionary Association. He and his sons oversaw the construction of Sin-lâu Hospital in Tainan, the first western-style hospital in Taiwan. The younger J. L. Maxwell served in the Tainan hospital from 1900 to 1923, during Taiwan’s Japanese era.

James Laidlaw Maxwell was followed soon after by other famous missionaries, most notably Thomas Barclay and George Leslie Mackay. The UK connection is immense, and was mentioned in the opening speech by the GLEC pastor with the challenge that the UK has greatly changed since 1865 ~ and now we need to take on that responsibility ourselves and to go out and share the Gospel around the world….

And so to last night’s Thanksgiving Dinner…. worship, prayers, speeches, testimonies, songs and then a time for the offering (let’s face it, fund-raising for mission is a practical necessity!), and then the food and all 10 courses – it was very delicious!

And finally we had to have a group photo, and fortunately, dear Doris came to join us ~ her Studio Classroom has a mobile app for smart phones, and she delighted in showing our students how to find it.  Not many 89-year-olds are quite so smart when it comes to finding their way around smart phones! 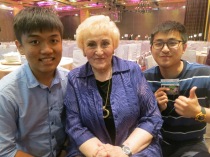 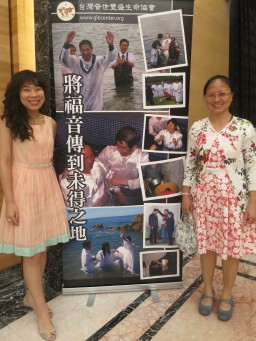 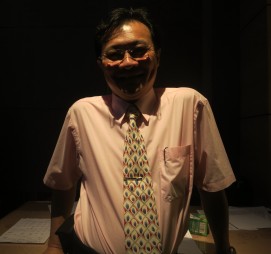 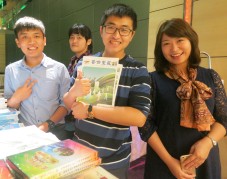 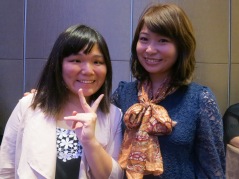 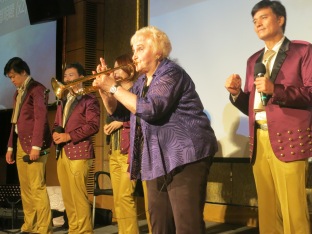 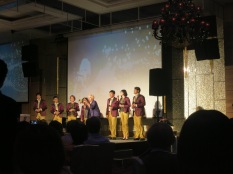 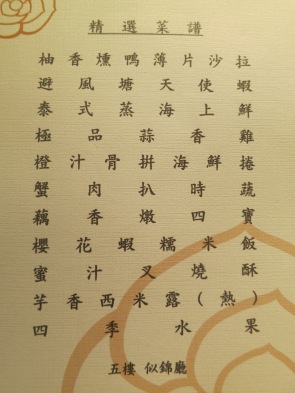 And here we all are ~ a special memento of a great evening!

Notice how smartly dressed our students are ~ no shorts, no flip flops and not even any T-shirts in sight.  Not easy to accomplish, but hey, well worth it, ha ha!

In thanksgiving to Almighty God for 150 years of mission in Taiwan ~ and here’s to the next 150 ~ YES!