Culture Shock.  You’d never believe it.  Yep, for a northerner (that’s me), the south of Taiwan is quite a culture shock ha ha!  Everything works just like in the north, but at a much more stately pace.  Nobody seems to be in a rush to go anywhere.  There’s just as many traffic lights, but hardly any cars or buses or even people waiting at them.  It’s just, so, well, quiet!  And spread out.  In the north, all the old one-storey Japanese houses are now largely gone, replaced by multi-storey apartment blocks, but in the south, they’re still lived in, so the houses have lots more character.  Convenience Stores are one-storey high, with no apartments on top of them.  Government buildings and universities are vast and spread out, and at a weekend, all empty of workers and students. So there’s a kind of deserted feel.  Space is everywhere!  Up here in the north, every bit of space is crammed with people or cars or motorbikes or buildings. But in the south, wow, y’know you can actually see the sky!  And when local people in the south say the liveliest places in town are the night market and department stores, well, that maybe so, but hey, the word ‘lively’ is relative, and clearly has a different meaning in the south ha ha!

So that’s Pingtung City 屏東 in a nutshell.  That’s where I was this past weekend.  In Pingtung City and County, in the farthest south of Taiwan.  Where Taiwan’s famous southern hospitality is at its best!

Actually I spent Friday evening leading an English Bible Study for students at St. Peter’s Church, Chiayi, so on Saturday, off I went by train 90 minutes south to arrive in Pingtung, invited by the vicar of St. Mark’s Church, Rev. Cheng Chen-Chang 鄭成章牧師 and his wife. They used to be based here at Advent Church, but he grew up in Pingtung, so it’s like going home.

St. Mark’s Church is small, friendly and incredibly hospitable. It’s always been like that. Clergy come and clergy go, but the church members remain so loyal and when a visitor comes, they all turn out for a big welcome, and accompany the visitor wherever they go. And in-between visitors, they spend their time trying out new restaurants and new routes, all ready for the next visitor.  And so it was that everywhere we went over this past weekend, it wasn’t just me, but many of the church members too.  Always at least 6 of us, and on Sunday there were 11 of us!  Never a dull moment ~ non-stop laughter all weekend!

On Saturday morning, they’d had a meeting all morning, and were more than ready for a little lunch ~ the restaurant even had a noodle-cutting robot in action, he’s kept busy all day!  In the afternoon, 3 children turned up for the start of their weekend outreach programme but their teacher had a family emergency at the last minute and couldn’t be there.  So we learned a bit of English and a few action songs and rhymes, and it was fun – and only a little exhausting! 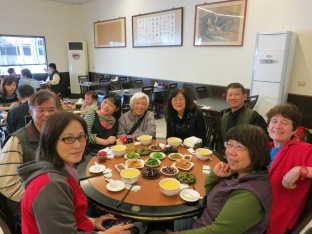 And then, just before it got dark, off we zoomed to see the Liudui Hakka Cultural Park 六堆客家文化園區 in Neipu ~ its 6 huge umbrella-like pavilions represent the 6 camps (‘Liudui’), the collective name for the 12 townships in Pingtung and Kaohsiung traditionally inhabited by the Hakka people….. 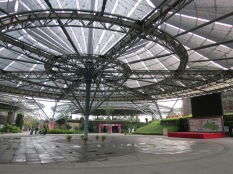 And back in time for the evening’s church fellowship group ~ they kindly listened very patiently while I shared about my time in the UK last year and all the churches I visited ~ and we all finished with ‘This is the world that God made’, our action rhyme learned only a few hours earlier, and a group photo!

And so to Sunday ~ busy busy busy!  St. Mark’s Church Sunday service is at 10:00 am and I was delighted that 2 of my young friends from St. James’ Church, Taichung, both students in Pingtung, came for the service and yummy lunch, all cooked by one of the church members – and birthday cake for all March and April birthdays, followed by Bible Study.  I was very honoured to meet Mrs. Ning, aged 90, who with her older sister had arrived from Mainland China 60 or so years ago and started St. Mark’s Church as a fellowship meeting in their home. She seems as if she has the same amount of enthusiasm as she had 60 years ago, telling me all the old stories, so full of life and energy! Oh yes, and I met Mrs. Lin Shiu-Hua 林秀華 who turned out to be a distant relative of my good friends, Rev. and Mrs. Hsu, who are from Pingtung but living up here in Shuang-Lien Care Home, Sanzhi.  Distant relative Mrs. Lin may be, but she knew exactly the relationship ~ Rev. Hsu is the older brother of the sister-in-law of Mrs. Lin’s mother’s cousin-on-her-father’s-side. Or something like that lol!

Mrs. Ning (left) and Mrs. Lin (right) are both here in purple, top left photo below ~ and further down, you’ll see 3 ladies who we discovered were all wearing black and white stripes, ah, it’s never boring at St. Mark’s Church! 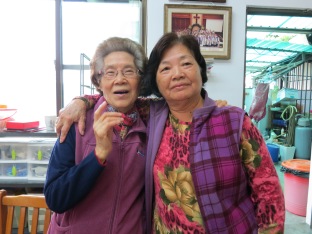 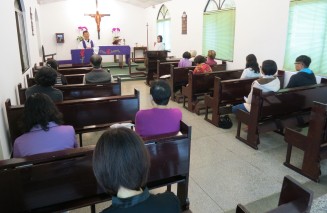 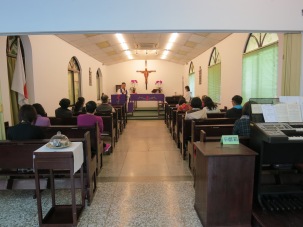 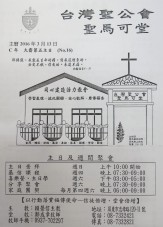 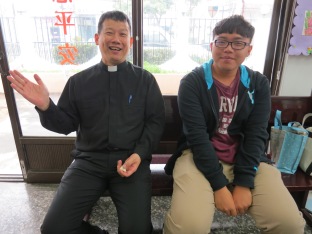 And at 2:30pm, off we set once more.  11 of us in 2 vehicles.  A grand tour.  The last time I was in Pingtung was for the Opening Service of the diocesan convention 3 years ago, and it’s many more years beyond that since I went anywhere beyond St. Mark’s Church.  So, a wonderful opportunity!

First stop, the ‘tribal village’ of Ulaljuc 吾拉魯滋部落, newly built for residents of typhoon-damaged Taiwu Village, mostly people from the Paiwan Tribe.  Typhoon Morakot on August 8, 2009 had a devastating effect on many of the indigenous villages in Pingtung County, and since then the government and different organizations have been active in resettling those affected.  Taiwu Elementary School is famous for its folk choir, and for its Paiwan architecture.  Opposite the school is the R.C. Church which is full of Paiwan symbols and designs.  The altar usually has water flowing under it, but one of the sheets of glass had shattered, so men were busy repairing it ~ and up above, glass bottles hang from the ceiling, dark colours near the front and white further down, symbolizing Christ’s cleansing from sin…. 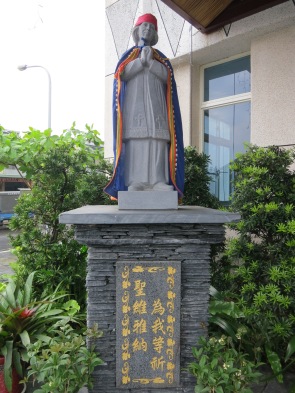 The first edition of the church, an adobe structure, collapsed within a few years after an earthquake. The current Spanish fortress-castle style building dates from 1869-1870. In 1984, Pope John Paul II declared the church to be a basilica minore. The most recent renovation was completed in 2003.

The Treaty of Tianjin, forced on China in 1858 by the Western powers, specifically permitted missionary activities throughout the Qing Empire. Despite this, when Sainz and his companions arrived from the Philippines in May 1859, they were arrested by the magistrate and detained for two days before being allowed to proceed into the interior. Later the same year, Sainz bought the land on which the basilica now stands for 62 silver coins. Work on the church was delayed because traveling between Wanjin and Kaohsiung was difficult and dangerous. The church also bought some plots of land nearby; these were loaned to local converts who farmed them.

In the first decade, the structure was set on fire several times by anti-Christian mobs. However, the main walls always survived, and overt hostility subsided after 1874, when the Emperor Tongzhi conferred on the church an inscribed stone bearing just two characters. Reading feng-zhi (奉旨), meaning “an edict sent by the highest authorities,” it confirmed that the church enjoyed official protection. 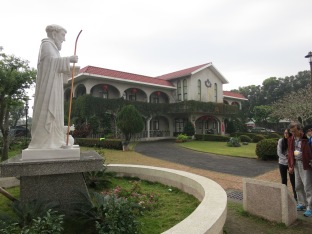 About 80% of the village’s residents are R. C. and the church is particularly popular at Christmas when there is a stunning light show on the outside walls of the church.  But for us, no light show, instead we had steamed buns, ‘bao-zi’ – a must-eat on any trip to Wanjin – so they say, and now I know!

And onto the final stop ~ the relocated indigenous community of Rinari 禮納裡部落 in Majia 瑪家 Township, Pingtung.  Rinari is similar to the village of Ulaljuc 吾拉魯滋部落 in that the people were forced to abandon their mountain villages after Typhoon Morakot, and the government has helped them to relocate.  Rinari community comprises people from the Paiwan and Rukai tribes originally from Pingtung’s Dashe Village in Sandimen Township, Haocha Village in Wutai Township and Majia Village in Majia Township, a total of about 480 households, and between them they have 9 churches – 2 R.C. Churches, 3 Presbyterian, 1 Chinese Free Methodist and 3 Seventh Day Adventist. Quite amazing!  The houses are built a bit like a traditional European village, but the decorations on the houses are all Paiwan and Rukai symbols and designs.  Many of the people make their living from tourism through guest houses, selling food and traditional crafts.  Of course like any relocated community, they long for their original homes and often return secretly to their old lands for farming and harvesting of produce.  One area of Haocha Village is called 脫鞋子的好茶部落 ‘Take-your-shoes-off ‘, and that is what you are asked to do before entering any of their shops or eating places, because like Moses, they know they are on holy ground. A member of the Presbyterian Church welcomed us and shared with us how they share the Gospel with visitors through this message ~ and all as we munched away on all sorts of delicacies! 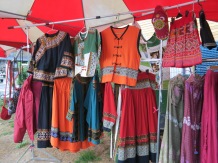 I could write a zillion more words about Pingtung and all the lovely people at St. Mark’s Church. Suffice it say that we ended up in a Hakka restaurant in Neipu for more delicious food, and as time was a bit short for me to take the train from Pingtung to the High-Speed Rail Station in Kaohsiung, so a minibus-full of still-very energetic and enthusiastic church members delivered me safely to the HSR Station by 8:00 pm.

And so home almost on the stroke of midnight.  Full of gratitude and great memories!

An incredible weekend, wonderful scenery, fascinating places and lovely people.  Thanks be to God, and thanks to all the delightful people at St. Mark’s Church, Pingtung.

Here we all are on Sunday morning!

If you ever have a chance, you just MUST MUST go to Pingtung and enjoy the beautiful scenery, the warm spring weather, the majestic mountains, the tiny villages, the great variety of churches ~ and of course especially St. Mark’s Church and the gracious and kind people there.  The salt of the earth, every one of ’em!