Six weeks ago, the container ship, TS Taipei grounded itself just off the northern tip of Taiwan, in Shimen District, and broke in two. This is the scene this afternoon…. 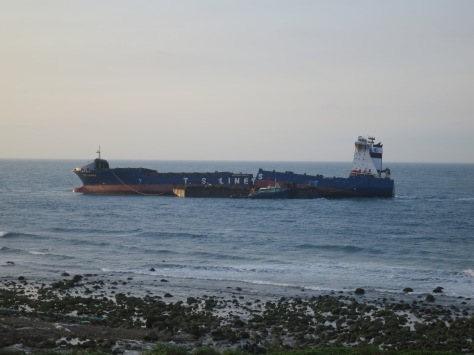 And this was one of the reports at the time….

The T.S. Lines freighter, is grounded on rocks close to shore after losing power in bad weather shortly after departing from Keelung Harbor en route to Hong Kong. Breaches to the hull resulted in flooding of the engine compartment and damage to a fuel tank.

After grounding on March 9, 2016, rough conditions hampered efforts to approach the ship, but the crew of 21 was successfully airlifted on March 10. However, the following day, a helicopter landed EPA officials onto the ship to make inspections. While airlifting them off the ship, the aircraft lost control and crashed into the ocean, resulting in the loss of 2 lives.

An oil boom was floated around the ship in an attempt to contain oil spilling from the engine room, but the rough conditions have limited efficacy of the boom, and some oil has washed onshore. The ship is carrying 447 tons of gasoline and 40 tons of diesel fuel. The ship is also reported to be carrying 9 containers of hazardous materials.

There are also concerns that a significant oil spill could jeopardize the operations of a nearby nuclear power plant that relies on seawater for its cooling systems.

Now 6 weeks later, and the clean-up operation is well under way.  But there’s oil everywhere, and it’s not an easy job.  It’s been raining for weeks too, which doesn’t help.

As of April 5, a total of 3,836 people had been mobilized to remove 26,840 kilograms of debris and clean up 30,499 liters of spilled oil from the wreck, according to the Environmental Protection Administration.

It’s also become something of a tourist attraction.  Today I went along to check it out, and there’s people everywhere taking photos.  This was my view… 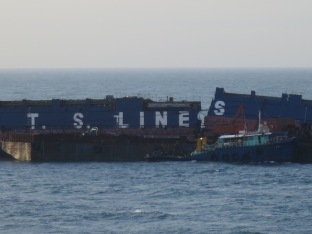 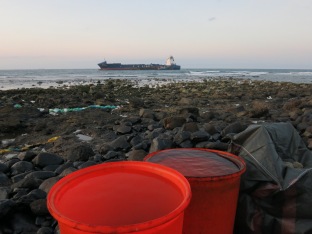 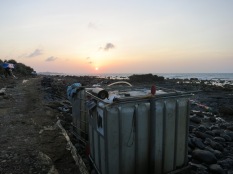 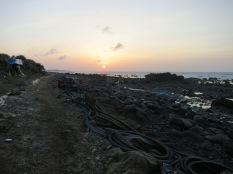 You must check out this You Tube report below – ignore the adverts and move onto watch the reporter send a drone over the ship just a few weeks after it was grounded… he’s done a great job, but it’s tragic of course to see it all….

Hoping and praying it’ll all get cleared up with minimum permanent damage to the environment….