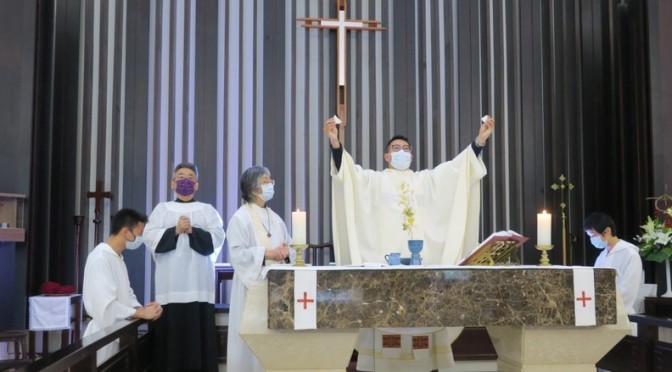 So here I am, along with 23 million other people, on this small, densely-populated island of Taiwan, only 130 km across the Taiwan Strait from mainland China, and only 1,000 km or 2 hours’ flight from Wuhan, the original epicenter of the coronavirus. In late January, Johns Hopkins University said Taiwan was one of the most at-risk areas outside of mainland China, owing to its close proximity, ties and transport links. Taiwan’s first case was announced on January 21, exactly 3 months ago today, and let’s face it, it did not look promising.

Yet, fast forward 2-3 months, and a CNN report on April 5 is titled, “Taiwan’s coronavirus response is among the best globally”. True. As of today, Taiwan has 425 confirmed cases, 217 recovered and 6 deaths. The latest group cluster are 27 military personnel from the Panshi Fast Combat Support Ship, part of a goodwill fleet that visited Palau from March 12 to 15, they are now being followed up and contacts traced. Hopefully, as has happened so far, the virus will remain contained. Although the economy is suffering badly, so far there has been no lockdown or isolation imposed by the government, and although many activities are cancelled, schools, work and Sunday church services continue more or less as normal…

Global suspension of postal services due to the virus means I can write to you in the USA, but not if you live in Hawaii. On the other hand, you can write to me from anywhere in the USA, including Hawaii. If you’re in Canada, you can write to me here in Taiwan, but sadly I can’t write back. I can write to you in the UK, but you can’t write to me, so my Easter cards have arrived with you, but yours will not arrive here until after postal services resume again. We can send our diocesan magazines to Northern Ireland, but not to Ireland, and Ireland can’t send anything to Taiwan, whereas Northern Ireland can. We certainly live in interesting times.

So it’s a good job we have other ways to communicate. And communication in Taiwan these days is mostly done from behind a face-mask. Face-masks have been popular in Taiwan for years, but now they are compulsory on public transport, in all government buildings, schools, markets and many shops, along with temperature checks, hand sanitizer and social distancing. Most people wear them most of the time, me too. Face-masks hide virtually all facial expressions, especially as many Taiwan people also wear glasses, so you never again need to smile at anyone, in fact you can happily ignore everyone around you. That is until you get to teach a class of children and need them to speak, like in my weekly early morning class at the local middle school. They sang for my birthday a few weeks ago, all masked up. Thanks everyone! We also went there in Holy Week to distribute Easter eggs (actually salted duck eggs, dyed by our student fellowship) to the staff and children…

In our church services, wearing a face-mask has also become compulsory, but now I realize it’s easy to get away with not singing any hymns because nobody can see your lips moving, and anyway, it’s fiddly to sing as it moves the mask too much and you need to adjust it again – so it’s better to stay quiet. But if you stay too quiet, then the live broadcast doesn’t sound very live, as nobody can hear the congregation saying anything. And be careful not to yawn, or the mask comes loose, and certainly don’t laugh – masks only stay in place if you don’t move your mouth. The only time in the church service that anyone takes their mask off is the preacher for the sermon, and for everyone to receive the bread at Holy Communion. The photo at the top (and below) shows our masked communion service on Easter Sunday at Advent Church….

Actually, we encourage all the elderly to stay home and watch the livestream of services from our cathedral and some of the other churches instead. Advent Church cancelled its Holy Week services this year, and we all stayed home. Isn’t it just great sometimes to lie on your bed and go to church? That’s what I did, flicking through church services throughout the diocese as they broadcast live. And that’s how come I watched the end of the Maundy Thursday service from St. Peter’s Church, Chiayi. After the altar was stripped and the cross covered in a black cloth, the priest sat down and prepared to turn out the light, and to read aloud, in the darkness, the moving story of Jesus’ last hours. Except that at that exact moment that he switched out the light, the music started outside in the street, telling us all that the rubbish (garbage) truck was coming. The rubbish trucks have a set timetable, but all play music to let everyone know they’re coming along, like ice-cream vans do in the UK. And y’know, it was really quite surreal, but also kind of appropriate – the people outside throwing their rubbish into the trucks to be taken away, as the story of Jesus taking away our sins on the cross was being recounted inside. Almost a parallel universe.

On Easter Sunday, our preacher at Advent Church encouraged us to follow the example of Mary, on the day of resurrection at the tomb, who turned and saw the risen Christ, having first thought he was the gardener who had removed the body. In times of turmoil, grief, pain and suffering, we are inclined to blame others for everything that’s going wrong. But in reflecting on our own sin and turning in repentance, so we turn, as Mary turned, and see the risen Christ – and we pray that we might see the risen Christ in others too. We so easily see the evil in others, rather than the good. That is my challenge and prayer this Easter season for all of us, as individuals, communities, governments, countries and world leaders.

But, when I ask myself what is my response to all the pain and suffering in the world caused by the coronavirus, I am angry. Taiwan has done so well in handling this terrible situation, all without any help from the World Health Organization, which it’s not allowed to join, and all in such contrast to so-called ‘Great’ Britain, where the government has not just been slow to act, but inept and arrogant in its response. People here have asked me so many times to explain ‘herd immunity,’ and how come the UK government is in such a mess that even Prince Charles and the prime minister ended up infected. Don’t get me started, but it’s a good job the queen appeared on TV at the right moment to give a great speech and some hope to us all. Of course, all the credit must go to the exhausted front-line workers in hospitals, care homes, emergency services, supermarkets, delivery vans, schools and all those who’ve stayed home and done their bit to flatten the curve, plus those who’ve used their time creatively to raise money and help those affected. Yes, Taiwan learned from SARS in 2003 (read this account of what went wrong then) and has been proactive and vigilant ever since; plus the people are willing to comply with all restrictions for the greater good. And now the country is donating face-masks by the million to governments around the world who for the last few months have had the arrogance to say that face-masks don’t work or are not necessary. God have mercy!

In an opinion piece by Ian Inkster in the South China Morning Post titled, “In the battle against the coronavirus, East Asian societies and cultures have the edge”, he includes Taiwan when he says, “What has come through in each of the East Asian societies is a moral economy compounded of ancient traditions of Confucianism and Buddhism, and moderation of individualism by deep values of benevolence, shared responsibilities and obligations that might well be at the heart of East Asia’s success. Cultures that are sturdy in a world of change do not have to rely on expensive policies or promises of rapid economic recovery, for cultural suasion can go a very long way. It can save lives.” Food for thought indeed.

These few weeks we were supposed to be hosting the World Anglican Chinese Clergy Conference (WACCF) in Taiwan, and the 53rd anniversary celebrations of the foundation of St. John’s University, held each year near the last week of April. The result of so many events being cancelled is that we have far more time than usual, not just because the events are cancelled, but the planning and organization of them all too. It does mean more time for our new bishop, Lennon Y. R. Chang, who continues to be very busy as chair of the board of trustees of St. John’s University, as well as overseeing the remodeling and modernizing of the diocesan office building in central Taipei, which we hope will be finished next month.

Having less weekend events means more free time, and encouraged by the government to get out into the countryside for fresh air and exercise, so all the bicycle paths, parks, mountains and scenic areas locally are full of people, young couples, families, small groups of students, retired people, all enjoying themselves. That just has to be a good thing. Nature is there waiting for us to come and see it. The cherry blossom season is over, so is the wisteria at the middle school (photos above and below, courtesy of Jasmine Yu), and now it’s the frog-croaking season in full swing – they go on and on all night long!

Thanks for your continuing prayers, support and concern for us all in Taiwan, they are much appreciated. Praying for God’s mercy, grace and comfort in a hurting world. Stay safe everyone 😷

8 thoughts on “Update from Taiwan: Masked Communion in a Time of Coronavirus 😷”