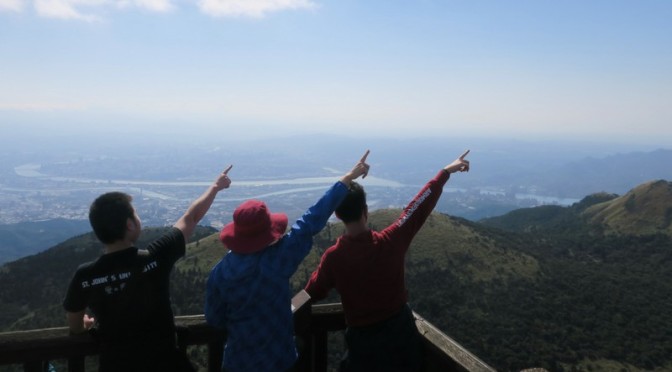 You just can’t beat a fine Saturday on Yangmingshan. And especially in the company of 2 very strong young men! A cold start, but sunny and dry all day, very muddy in just one place, but otherwise perfect. The 2 very strong young men who came with me yesterday are former students here at St. John’s University (SJU). Tze-Foun子寬 (in dark red) from Malaysia graduated 18 months ago and one of his dreams has been to go mountain climbing in Taiwan, while Dong-Gua 冬瓜 (in the black T-shirt) is from Taiwan, and last went up Yangmingshan when he came with me about 5 years ago. Both are now working full-time so fitting in exercise is a challenge – but if they hadn’t come with me, I think they were just planning to go to the Taipei Game Show instead. Yangmingshan is just so much better!

So, Saturday was THE day. Weather forecast perfect. We left SJU on the first bus at 5:45 am. From Qingtian Temple, just above Beitou, we did the western circuit of Mt. Xiangtian 向天山 and Mt. Miantian 面天山, then the 3 of the Datun range 大屯山 West, South and Main Peaks and back via Erziping 二子坪. On the top of Mt. Miantian, we met 2 SJU alumni (photo below), and there were lots and lots of people everywhere, ah yes, we talked to everyone! After all, it’s not every day that a group made up quite like ours goes mountain climbing together. And survives to tell the tale – and still smiling!

Kudos to Dong-Gua whose endurance levels were 100%, he persevered and completed the whole circuit, despite apparently not having done any exercise for the last 2 years, nor having any breakfast on Saturday morning, as well as breaking the sole of his boot on mountain No. 3, ripping his trouser leg wide open on mountain No. 4, and surviving more or less only on chocolate and coffee until midday. He never feels the cold and spent all day in a T-shirt, while the rest of us were well done up – check out his boot below!

Kudos too to Tze-Foun who put in 100% effort, with tons of energy, enthusiasm and patience, and despite longing all day for his lunch and getting leg cramp in the last few hours, he now has all sorts of ideas for taking his friends up the same route, and has lots of people already interested for the next trip. He’s shared his experiences widely with everyone at church today, oh he was so excited ~ his coming on our trip was such a blessing!

Gotta smile though, we all have aching legs today, even though yesterday was slow going and we hardly worked up a sweat all day. Ah but it was fun! Last time I did that circuit, in August last year, it took nearly 6 hours, with 4 hours 30 minutes of moving time. This time it took us 9 hours, and moving time was the almost the same, 4 hours 20 minutes. Speed is not everything, but we did have a lot of rests for Dong-Gua to recover his energy! Hey, the guys were so lovely, and we were all so happy to finish in one piece. And they did get very creative with the sticks they found to help them along!

A great day out, thanks guys!

And we came down to the cherry blossom at the Qingtian Temple bus stop, just coming out and looking beautiful!