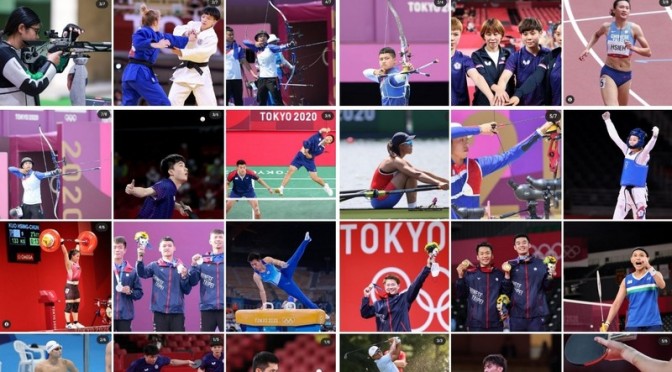 Yes, huge congratulations to Taiwan on their biggest haul ever: 12 Olympic medals! To be selected for the Olympics is a huge achievement, and to get a medal, any medal, is an extra ~ and all deserve praise and encouragement. Taiwan won 5 medals at each of the 2 previous Olympics, and this time, they’ve already doubled those records with 12. The country is so bursting with pride, and social media is buzzing with excitement every evening as matches and games are broadcast live – and as Taiwan time is only one hour behind Tokyo – so the whole country can watch in real time. Well done everyone!

Final Tally: Taiwan ended at No. 34 in the overall medals table, below Georgia and above Turkey.

For political reasons, Taiwan participates in the Olympics as ‘Chinese Taipei’, but during the Olympics Opening Ceremony on July 23, Japan’s main broadcaster NHK introduced the team as ‘Taiwan’, and in response received a message of thanks from the President of Taiwan, Tsai Ing-Wen. Each team was introduced in accordance with Japan’s 50-tone sound phonetic system, so whereas ‘Chinese Taipei’ would have entered the arena under chi (チ), instead the team entered the arena under ta (タ) for ‘Taiwan’. Everyone here is so happy, thank you Japan!

President Tsai is actually one of the most enthusiastic supporters of Taiwan’s Olympic team. Her social media is full of photos of each athlete, along with words of congratulations and encouragement – she even spoke to Tai Tzu-Ying after her badminton final, when she just missed out on gold. As far as I can see, not many other world leaders have anywhere near the amount of Olympic coverage on their social media accounts. ☺️ Kudos Taiwan!

Of the 68 competitors from Taiwan at the Olympics, 13 are indigenous. Yang Yung-wei (楊勇緯), who won the judo silver medal is from the Paiwan tribe, and Kuo Hsing-chun (郭婞淳), who won gold for weightlifting, is Amis. Each of the 68 athletes has their own story to tell, and will be forever remembered as Olympians. One of the most moving stories is that of Taiwanese flyweight boxer Huang Hsiao-wen (黃筱雯); see this report: “Taiwanese boxer caps rise from humble beginnings with Olympic medal“. But when all the athletes return home, whatever their achievement in Tokyo, they are still subject to Taiwan’s strict quarantine regulations, albeit modified, since they were under strict regulations in Tokyo and are all double vaccinated. Instead of 14 days in hotel quarantine, followed by 7 days self-health management at home, they do 7 days hotel quarantine, followed by a PCR test and then 14 days of self-health management at a place of their choosing – and their first breakfast on arrival is provided by President Tsai. So no grand family reunions just yet!

Two of the medal winners are local to this area. Wen Tzu-yun (文姿云), the Karate Bronze Medal winner is from Tamsui, while Lo Chia-Ling (羅嘉翎), the Taekwondo Bronze Medal winner, is from Sanzhi, and both towns have been enjoying the limelight for the last few days. St. John’s University (SJU) is about midway between the two places. This is SJU and the sea nearby, photos all taken in the last few weeks ….

The Olympics has provided some welcome relief from worries about the pandemic. It has also coincided with Taiwan moving down from Level 3 alert to Level 2, which officially happened on Tuesday July 27, but instead of everyone rushing out to make the most of their new freedoms, instead they are staying inside to watch the Olympic matches live on TV. Under Level 2, we can now have up to 50 people meeting inside and up to 100 meeting outside, allowing for social distancing, and facemasks must still be worn everywhere, except for when eating and drinking.

Beaches are now open, and sports centres, but with no swimming. Restaurants are open for dining-in, but subject to local conditions, meaning they can be closed if there is a surge of cases in the area, like happened in Chiayi a few days ago, a cluster of 13 cases led to closure of all indoor dining in the whole of Chiayi City and County. Now that kindergartens and daycare centre staff are mostly all recently vaccinated, so they are allowed to open, but state schools are still on summer holidays. Our church kindergartens are opening up, and church services can now start again in person, as long as the rules are followed. We even have an ordination service this Friday (49 people allowed to attend), our first gathering for several months. Watch this space!

Fortunately, since we moved to Level 2 a week ago, confirmed cases have remained low. Today we have 16 domestic and 3 imported cases, with 2 deaths. Today’s new COVID-19 cases bring the total in Taiwan to 15,721, of which 14,230 are domestic infections reported since May 15, when the country first recorded more than 100 cases in a single day. To date, 791 people have died of COVID-19, including 779 since May 15. The vaccination campaign continues apace, 34% of the population have now received their first dose.

And the other distraction from the pandemic has been the rain – and the typhoon. Typhoon In-Fa passed near northern Taiwan the weekend before last, and although the winds were not too strong, the rains were torrential and there was flooding in some areas. The typhoon circulated out over the Pacific Ocean for several days before finally moving NW towards Shanghai on Saturday July 24. Down at our local seaside area, the waves clearly came right over the top of the embankment and left a ton of flotsam and jetsam lying on the road below. It’s been raining most days ever since, and has led to serious flooding and landslides in southern Taiwan. The News is reporting that this current low pressure area might well form into a typhoon in the next few days. This is the local scene after the typhoon, and since…

As a result of all the rain, there are now snails much in evidence, taking perilous journeys across the roads in the area – I counted about 20 this morning. By the afternoon, sadly most will have been crushed under the wheels of a motorcycle or car. It’s useless to speculate what on earth they are doing and why they risk their lives for no clear purpose other than to just cross the road!

The snails are not the only ones that currently seem to be finding it hard to know which way to turn. We have lots of overseas students here at SJU, and unlike the Taiwan students, they haven’t been able to go home over the summer. in fact, they couldn’t go home over Chinese New Year either, due to strict quarantine regulations at both ends, and many are getting homesick, the Malaysians in particular. The pandemic has meant there’s no summer jobs here, and with Covid raging in Malaysia, many of their families back home are struggling financially, and not able to send them money. We are providing food coupons for 16 of them, and with SJU willing for them to continue studying online this coming semester, so several of them have found cheap flights and have decided to return home to Malaysia, planning to return to Taiwan after Chinese New Year 2022. Do pray for them, and for all those struggling in the pandemic. This includes our SJU student recruitment for the new academic year – though not finalized yet, the pandemic is sure to have had a big effect.

Finally, in case you think I’m totally biased towards Taiwan in the Olympics, well there’s also the UK, but they are doing really well anyway, so now I’m turning my attention to Tanzania. There are only 3 Tanzanian athletes in this Olympics, all running in the marathon, being held this coming weekend. Apparently, London marathon bronze medalist in 2017, Alphonce Simbu, is Tanzania’s main hope for a medal, Other marathoners in the team are Failuna Matanga and Gabriel Geay. Filbert Bayi and Suleiman Nyambui won silver medals in the Moscow Olympics in 1980, so it’s now 41 years since Tanzania won an Olympic medal. Fortunately our local supermarket, Carrefour has been selling Tanzanian chocolate – so I am all stocked up, ready to cheer on the Tanzanian marathoners!

Sunday August 8: For Taiwanese athletes, Tokyo Olympics their best ever