Kendal, Cumbria is a beautiful town on a sunny day!  Happened to be there today, down by the parish church, and along the river where there were tons of seagulls getting fed…. 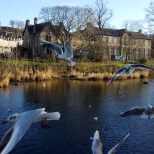 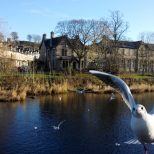 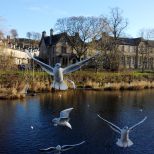 Then for the last 20 minutes I raced up to Kendal Castle and back –  it took 7 minutes to run around the top of the castle and in and out of every ruin – and then back down to the town to get to the car before the parking ran out!

Never been to the castle before, it’s best-known for being the ancient home of the Parr family, the most famous of which was Catherine Parr, the last of Henry VIII’s 6 wives, 3 of whom were called Catherine – only glad I wasn’t one of them.  Catherine Parr was the only 1 of the 6 to outlive her husband, and Henry VIII was already her 3rd husband ~ and after his death she went on to marry a 4th husband, who ended up outliving her.  Just a bit complicated!

Great views from the castle of the whole town, and in the 7 minutes I was there, even got to see a rainbow over Kendal.  Pretty spectacular!

One thought on “Kendal, Cumbria”