The actual day was last Friday, but many have been busy all weekend making offerings of food and drink and burning ghost money.  That includes my neighbours in Sanzhi 三芝.

Taken from an article in the China Post of this subject: Jung Yuan Pu Du – The China Post

Pu Du (universal salvation) are sacrificial rites with the intention of appeasing ghosts with no heirs to care for them. Jung Yuan Pu Du falls on the fifteenth day of the seventh month of the lunar calendar. Similar to lunar fifteenth of any month, households will prepare food offerings and burn ghost money, only on a much larger scale, as these offerings are not limited to one’s own ancestors but to any passing ghosts. The observance is generally a somber affair, but the rites of Pu Du are one of the more widely practiced among Taiwanese.

The ghosts without descendants to feed them are called “wandering souls (孤魂野鬼)” among many other euphemistic names, but most commonly; “the good brothers (好兄弟).” The good brothers are blamed for many of society’s ills and must be placated in order to have a more harmonious society. Placation comes in the form of feasts and chanting.

Jung Yuan Pu Du is a blend of folk religion (ancestor worship ie. ghosts), Taoism (Jung Yuan (7/15) is Taiost God Di Guan’s (地官) birthday) and Buddhism. The Buddhist religion has the “Ullambana” rite (盂蘭盆會) which is held on 7/15 and is a rite of offering food to the dead.

So when I came home yesterday afternoon, this was the scene in front of my place…. 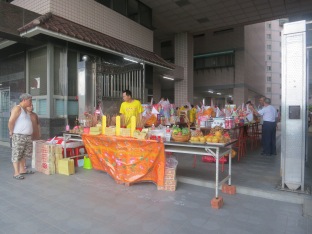 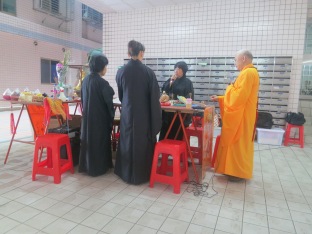 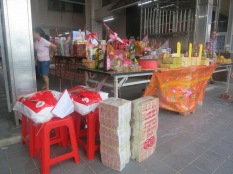 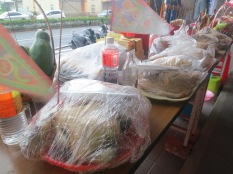 The neighbours had all brought food, laid it all out and offered it to the ghosts, ghost money had been burned, and the officials from the temple were part way through 3-hours of chanting. Yes, 3 hours. Meanwhile everyone else stood around chatting away, and every so often handfuls of coins or sweets were thrown around for everyone to scramble for….

And it was pouring with rain.

From a cultural point of view, this kind of tradition is quite fascinating.  That it should be so widely observed by so many people of all ages in 21st century Taiwan is also quite amazing.  From a spiritual point of view however it is closely associated with the powers of darkness, and local Christians stay well away.   After 5 minutes of taking photos and talking to the neighbours, I did the same.

The chanting went onto 5:00pm without a break.  3 hours exactly.

And the rain went on all night.