In the old days, St. John’s University was known as ‘St. John’s and St. Mary’s Institute of Technology’ (SJSMIT), and Edmund was Vice-President from 1972-76.  Their memories include living on the campus – with a garden full of chickens!

The Ders were last here 2 years ago for the 50th anniversary celebrations of Good Shepherd Church, Taipei, and where they were in charge from 1966-74.  And now they are back again full of life, energy and enthusiasm!  These days they live in Toronto, Canada, which always seems to be just about the coldest place on earth at this time of the year, but even the Ders felt that the cold wind yesterday at SJU was a bit much – yep, it was bitter!

We had a great lunch with Andrew Chang and his wife Charlotte – Andy is also a former president of SJSMIT – and it was Edmund who officiated at the Chang’s wedding in Good Shepherd Church, only days after a big typhoon had caused the whole churchyard to flood. They had to build a bridge for the bride to be able to get over the water and into the church!  The Tan family came for lunch too – years ago they made candles, and it was from them that Edmund always bought his church candles! 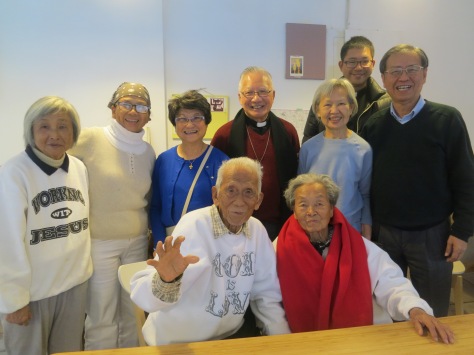 Then to St. John’s University to meet President Chen, and we also bumped into one of our esteemed alumni, Eddy Torng, who was at SJU to give a lunchtime speech about the Rotary Club – he was so delighted to meet his former vice-president!

Edmund told President Chen how he had come from Hong Kong to study at National Taiwan University in 1954 as an overseas Chinese student of Foreign Languages.  (And he later told me how in 1961 he had been sponsored by CMS to visit the UK for 3 months, and that’s how he got to attend the installation of Archbishop Michael Ramsey – and Margaret will not let Edmund forget that if only they’d got married before his trip instead of afterwards, she could have gone too ha ha!) 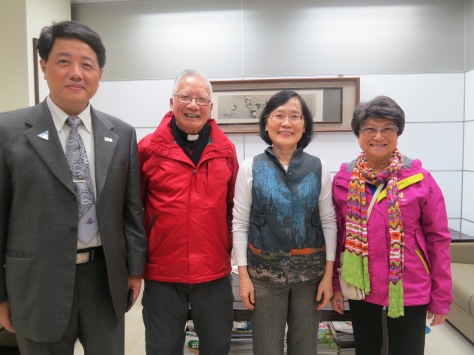 And finally off we went for coffee with Rev. Lennon Chang and his family, along with some of our older church members who knew the Ders from years and years ago…. 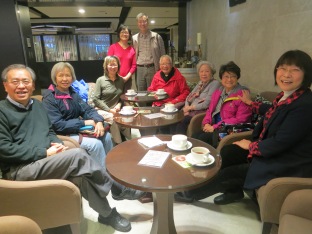 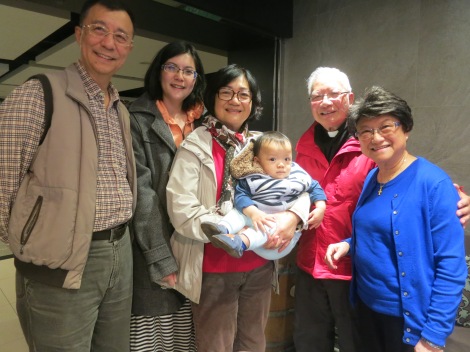 The connections are huge, and the stories many!   Most inspiring is that now at the age of very nearly 80, Edmund still volunteers as a hospital chaplain in Toronto visiting Chinese patients, he also preaches regularly in some of the Toronto Chinese churches and helps out wherever and whenever.  Clearly Margaret keeps her husband on the straight and narrow, and they have 10 grandchildren – and it sounds like the grandparents keep the grandchildren on their toes as much as vice versa!

Ah yes, a great honour to welcome such distinguished visitors to Taiwan!