Incredible!  Thanks be to Almighty God!  It’s done!  This month, St. John’s University and Advent Church have raised a grand total of NT$ 340,000 (US$ 10,350 / £ 6,985) for St. Francis Home  宜蘭聖方濟老人長期照護中心 in Toucheng, Yilan County – way beyond our expectations.  Thanks for everyone who participated!  Here’s our chaplain and rector, Rev. Lennon Chang, receiving the Thanksgiving Certificate yesterday from Sr. Betty in Toucheng R. C. Church ~  God is good! 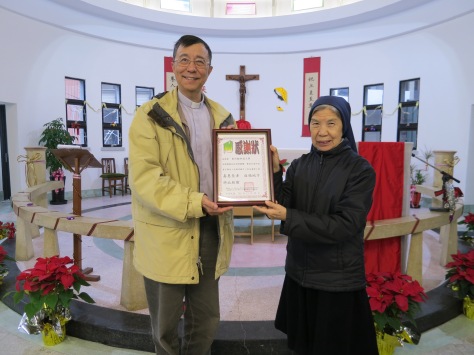 Every year during December, on behalf of St. John’s University and Advent Church, the SJU Chaplaincy organizes a huge bazaar and collects donations for charity, a different charity every year.  This is the 18th year since Rev. Lennon Chang started the charity fund-raising project, and this year is the second largest amount collected in all those 18 years (For my blog post about the actual bazaar, held on December 16, click here).  To give you an idea of how we usually do, last year 2014 we raised NT$ 210,000 (US$ 6,393 / £ 4,310).

This past summer, Rev. Lennon Chang led a group of 16 young people, mostly students from our chaplaincy, on an overseas mission trip (for my blog post about the trip, click here). The area where they went was very very poor ~ with few facilities, but a lot of enthusiasm and love.   The church there has a Sunday School of 120 children which meets in a run-down old classroom, but Lennon was so moved by the Sunday School ministry, that in prayer he felt inspired to offer to raise the funds in Taiwan to build a new classroom for them – at an estimated cost of US$ 10,000 (about NT$ 330,000).  His idea was that this year’s fund-raising project could be for the new Sunday School classroom. When he returned to Taiwan, he set about trying to put his plan into action, but he immediately heard the bad news that such a donation made to an overseas charity would fall foul of Taiwan’s tax laws and be taxed at 20%.   He was heartbroken.  He’d made a promise to the church overseas and now he couldn’t fulfill it.  Prayer was the only answer.

Soon afterwards, he happened to meet a Christian friend, and out of the blue she asked him about his fundraising plans.  Long story short, she offered to donate the US$ 10,000 herself to build the Sunday School classroom – and completely in compliance with Taiwan’s tax laws!  Praise God that our prayers were answered in the most amazing way.

We then set about focusing on finding a worthy charity within Taiwan…..

And beyond all our expectations, what is amazing is that this year’s fund-raising efforts for the Taiwan charity also exceeded US$ 10,000.  So that’s 2 lots of US$ 10,000 ~ God has doubled the amount!  Not only has the Sunday School classroom been taken care of, but St. Francis Home in Yilan has also received the same amount.  A bit more in fact, but that’s God’s extra blessing. 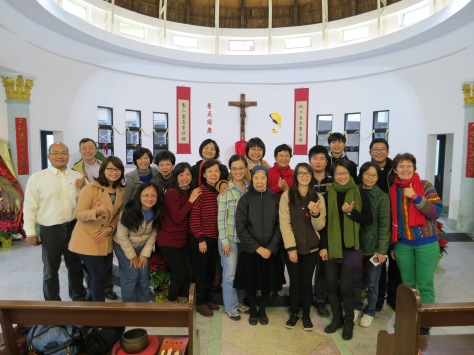 Actually we’d sent the money in advance by bank transfer, but we went to see the place and meet Sr. Betty.  She and the St. Francis administrator came to visit us a few weeks ago at St. John’s University to share about their ministry.  On her visit, Sr. Betty, being so humble and modest, had spent most of her time sharing with us about the importance of love and compassion, rather than pushing the financial needs of their building project.  So it was a big surprise for us yesterday to arrive in Toucheng and see the 9-story building already up and looking beautiful!  The outside is more or less completed, but inside there’s still much to do, including all the painting and interior fittings.  They are hoping it will be done by May and the first residents can move in. 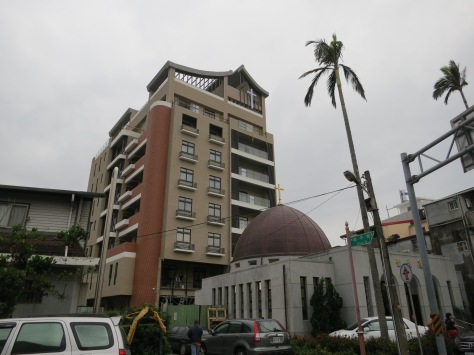 Toucheng is a township on the NE coast of Taiwan, in Yilan County.  Off the coast lies Guishan (Turtle) Island, which is Taiwan’s only active volcano. You can see it in the photos below in the distance, it’s visible from the top of the St. Francis Home, as is most of Toucheng.  Sadly Toucheng Town is very much overshadowed by its close neighbour, the nearby hot-spring town of Jiaoxi, which is booming since the Hsuehshan Tunnel opened up in 2006, meaning that travel times from Taipei are now less than an hour.  Jiaoxi is now oozing with money and new hotels and hot springs and restaurants and humming all year with tourists and new residents.  Toucheng is definitely not. 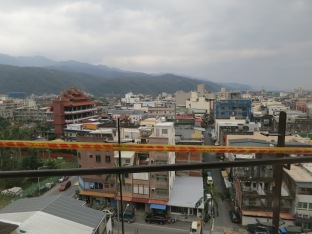 The R.C. Church in Toucheng is served by the priest from Jiaoxi.  He’s from Holland and belongs to the Vincentians, founded by St. Vincent de Paul.  The Daughters of Charity  sisters also belong to the same Vincentian Family, and Sr. Betty is one of the 2 Daughters of Charity sisters in Toucheng.  She has dedicated her whole life to serving the poor, in all different places in Taiwan.  She told me that there are 2 conditions for old people to be able to be admitted to St. Francis Home, firstly to be registered as on a low income, and secondly unable to take care of themselves.  When finished, 40 old people will be able to live there, and there’ll be a day care centre as well.  We had a tour of the 9-story building currently under construction ~ it’s gonna be beautiful, and the views are amazing.  It was a dull overcast day, but still we could see the whole world from up there! 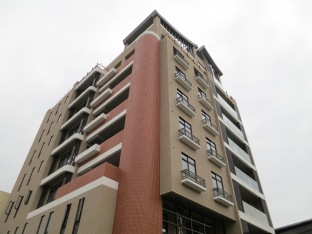 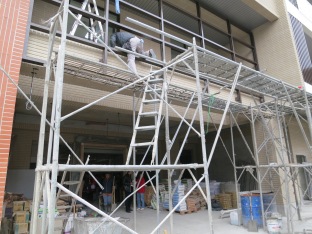 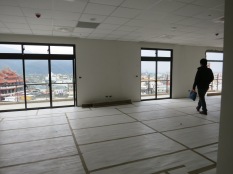 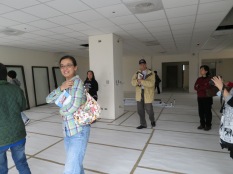 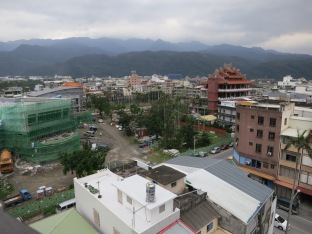 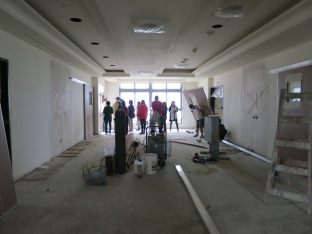 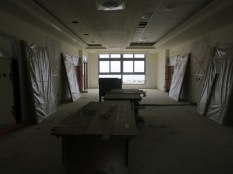 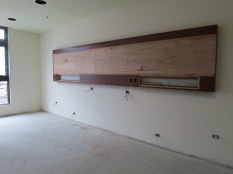 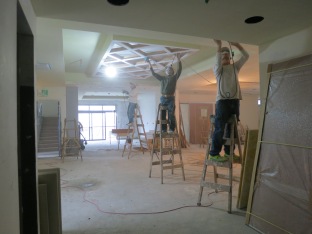 The Toucheng R. C. Church, right there at St. Francis Care Home, is modeled on St. Peter’s Basilica in Rome, a kind of mini-version.  It’s light, airy, and beautiful.  The church was built in the 1960’s and is still going strong, with about 45-50 at the regular Sunday Mass, many of whom work in Taipei but return at weekends to visit their elderly parents.  Next to the church is the place where the sisters live, and behind the church is the care home.  The original buildings were being used as a care home for the poor until they were declared unfit by the government a few years ago and closed down.  The residents were sent home. Some died, unable to take care of themselves, but others are ready to move back in as soon as they are allowed to.  They hope that it will be in a few months time.  Even though so far they’ve only raised NT$ 20 million of the NT$ 80 million that they need for the building project, they’ve gone ahead in faith, since there is such a need in the area.  Our contribution is tiny compared with how much they still need, but hey, every little helps! 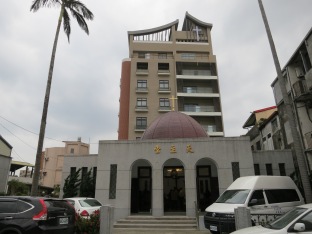 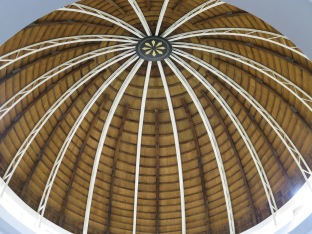 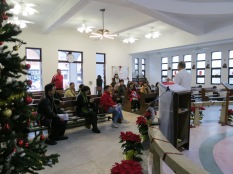 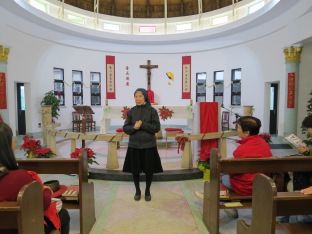 And finally us all – in the church…. 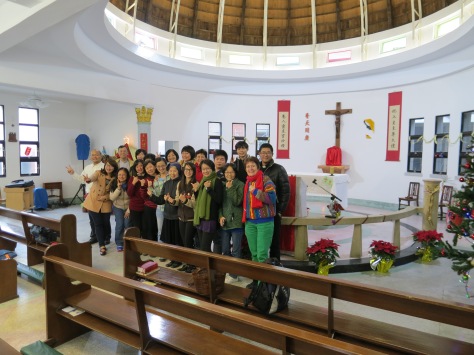 Grateful thanks to all those who contributed in any way to this year’s fund-raising project through donating money, time and /or energy.  It was all well-worth it, honest!  Let’s pray for the St. Francis Home and their ministry of love and compassion to the elderly in Toucheng.  And let’s give special thanks to Almighty God for blessing us all this year way beyond all our expectations ~ YES!