It’s Maundy Thursday, and there’s an air of anticipation in our chaplain’s office here at St. John’s University as our students get ready for the service tonight ~ many have volunteered to take part in the foot-washing, and they’re excited!

Excitement in Holy Week?! OK, it’s also the birthday of the leader of the student fellowship, and they’re all trying to keep their plans secret, but he knows something’s afoot and, well, we’ll just wait and see what happens!

While I was in the UK last year, I was given a copy of the CMS publication, ‘365 Days of Yes’, subtitled ‘Daily Prayers and Readings for a Missional People’ (2012).  Yes, I admit the bright and beautiful cover was the key attraction, but having got it back to Taiwan, the next challenge was to start using it. So on January 1 this year, I dutifully launched forth on a whole year of readings and prayers.  And y’know, I was pleasantly surprised.  It’s really quite good!

A big surprise was to come across my own name in the book a few days ago with a story from one of my past CMS Link Letters.  But an even bigger surprise was to come when I looked ahead to the reading for Easter Day; unbelievably CMS has chosen another one of my stories.  And I’ve been thinking about it ever since, and spent some time looking up the original story.  Turns out, the original was a reflection I included in my Link Letter in May 2008, which started as an experience I had during a church service on February 17, 2008 during my first – and so far only – visit to New Zealand. 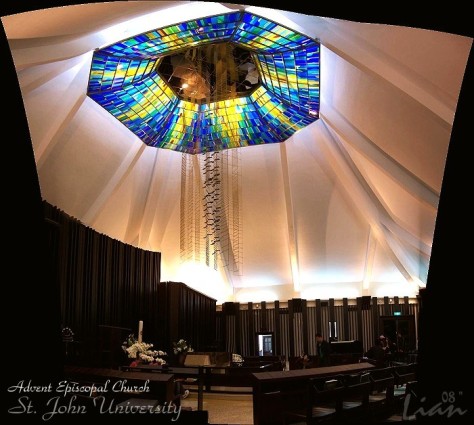 On February 23, 2008, our church here at St. John’s University, Taiwan, held a special Thanksgiving Service for the new stained glass that had been installed in the church roof over the previous few months.  The stained glass depicts Christ the Light of the Dawn, inspired by the name of the church, Advent Church, and the association of Advent with the coming of Christ and the light that He brings into the world.  The glass is eight-sided, as is the baptismal pool at the main entrance to the church.  Numbers are important in Taiwan.  Our chaplain and rector, Rev. Lennon Chang is also Professor of Mathematics here at St. John’s University and his specialty and great passion is Calculus, so he loves to explain the significance of different numbers. Eight (八 Pinyin: bā) is an auspicious number in Chinese culture (which is why the opening ceremony of the Summer Olympics in Beijing began on 8/8/08 at 8 seconds and 8 minutes past 8 pm local time) and the digit 8 also matches the mathematical symbol of infinity ∞.  In the Bible, the eighth day of creation was the first full day of the newly-created world, and circumcision was traditionally carried out on the eighth day.  New creation, new beginnings, new hearts! 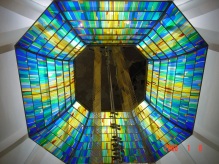 Reflection for Holy Week and Easter 2008

“Over Chinese New Year, I had the opportunity to visit New Zealand. On the last Sunday I joined my friends for worship in their home church in Paraparaumu (that’ll test your Maori pronunciation!). The church itself is built right next to a small airport, used mainly by light aircraft. The large window behind the altar was of clear glass, and through the window there was a view of trees, hills and sky.

That Sunday morning, as we were praying the final post-communion prayer (the one where we are sent out into the world in the power of the Spirit, to live and work to God’s praise and glory), suddenly through that altar window I saw in the distance a helicopter plummeting head-first towards the ground, followed by pieces of wreckage. The few of us in the congregation who saw it knew that a crash was inevitable, with almost certain death for the pilot. Later we discovered that a light plane had collided in mid-air with the helicopter, both then crashed onto neighbouring houses and shops, and all three people onboard died.

Six days later, I was back in Taiwan, and attending the Thanksgiving Service for the new stained glass. The artwork is magnificent, full of blues, yellows and reds; with a Jacob’s ladder sculpture hanging down towards the altar from the centre.  The altar itself is of marble, and usually left bare, reminding us of the stone that Jacob slept on when he had his dream of the angels ascending and descending the ladder. The top of the sculpture, the flat part of the ceiling, is covered in mirrors, giving an impression of never-ending ladders, going on and on, up and up into eternity.  The whole artwork vividly depicts the glory of God and the light of Christ, with the ladders calling us to come closer to God in prayer, joining heaven and earth in one glorious whole.

What a huge contrast between those two images. One glass window invites us to look out at the world; the other invites us to look up at the glory of God.  Through one window I saw images of death and destruction; in another I saw images of the glory of God and light of Christ. Holy Week and Easter!  Yet in both church services I heard words of how God sends us to take His light out into the dark world, and I also heard words of invitation to bring the concerns of the world to Him in prayer.  We are indeed called to do both, to do our part in reconciling the world with God, and God with the world.”

I can still remember that helicopter crash and that service, in fact my New Zealand friends reminded me about it only a few weeks ago. There’s an official account of it here. I remember the gasp of shock and horror which echoed round the church from the few of us who had our eyes open and saw what happened.  The others who saw it were mostly the youth group who were sitting up high on the balcony at the back of the church.  I remember the news reports at the time and the tragic images of the crash site, and I remember the vicar calling later to ask if I was OK.  It was tragic, horrific and kind of bizarre all rolled into one.

And now we’re in Holy Week 2016, and sadly death and destruction once again dominate the news reports. Our screens are filled with tragic tales of grief and despair, of missing loved ones, of broken hearts and shattered lives in the city of Brussels, the heart of the European Union.  Our hearts and prayers go out to them all.  We do not understand why and how people could willingly bring about such death and destruction.  All we can do is to cry, pray and plead with God for mercy, justice and peace to prevail.  All we can do is to hold onto the promise of Easter, the promise of the resurrection, of death being conquered, of new life in Christ, of reconciliation with a loving God who cries with us in the pain and the brokenness.

In ‘A Maryknoll Book of Inspiration’ (Orbis 2010) the reading for today, March 24, is from ‘The Violence of Love’ by archbishop and martyr Oscar Romero (assassinated during Mass on March 24, 1980, his feast day has since been declared as March 24) ~ ‘Everyone can contribute much that is good, and in that way trust is achieved.  The common good will not be attained by excluding people. We can’t enrich the common good of our country by driving out those we don’t care for. We have to try to bring out all that is good in each person and try to develop an atmosphere of trust, not with physical force, but with a moral force that draws out the good that is in everyone, especially in concerned young people. Thus with all contributing all can build the beautiful structure of the common good, the good that we construct together, and that creates conditions of kindness, of trust, of freedom, of peace.’

And so the reading for Easter Day in the ‘365 Days of Yes’ finishes with the prayer, ‘Lord, on this resurrection day, send us out again, inspired, refreshed, renewed to do our part in reconciling the world to you. Amen’.

Amen indeed, and blessings for Holy Week and Easter to you all.