Kinda misread the postcode and before I knew it, my friends turned out to have moved to EH41 not EH4 – which is the difference between the west and east side of Edinburgh ~ so off I redirected myself to what turned out to be the very lovely town of Haddington in East Lothian, birthplace of John Knox (considered to be the founder of the Scottish Presbyterian Church) no less!

A historic and beautiful town with famous churches and buildings galore, and a nice Holy Week Prayer Cairn at Holy Trinity Episcopal Church…. 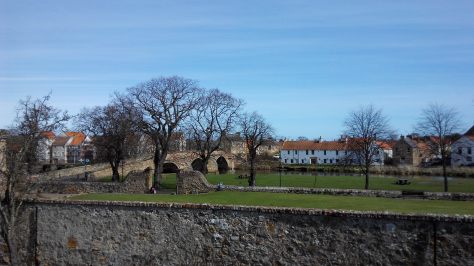 And discovering in fact that we’re now kind of directly across the Firth of Forth from where I was last Friday on Largo Law ~ so up we went this morning to the local hill, Traprain Law from where there were views of Fife, and even of Largo Law….

Us – looking happy – OK, so the pose was at my insistence!

The cliff is actually an old basalt quarry – but the legend is as follows:

“In legend, Traprain Law was the cliff from which Thenaw, the mother of St Mungo, was thrown when her father, King Lot or Leudonus, discovered she was pregnant by Owain mab Urien. Saved by divine providence, she was transported by boat to Saint Serf‘s community in Culross, where she gave birth to Kentigern, later also known as Mungo.”

So there you have it, a gloriously sunny day (all the more enjoyable after the freezing snow of yesterday) and summer is almost upon us….

Many thanks to my good friends for moving to such a wonderful place ~ East Lothian ~ YES!

One thought on “Haddington, East Lothian”