This week I’m in Taipei, staying at the Diocese of Taiwan office building, right in the central area of the city.  Within walking distance of most of the national government buildings.  Unlike most capital cities in the world, the centre of Taipei is also home to lots of ordinary Taiwan people.  There’s primary schools, street markets, local shops, health and community centres all there for local people.  I like it!

During the Japanese colonial era, 1895-1945, this area of Taipei was home to many Japanese living in one-storey Japanese-style homes, mostly wood, with heavy tiled roofs. Only a few such houses still remain and most of them are falling down and overgrown by trees and bushes. All have been replaced by higher-rise buildings, but the street layout remains the same ~ lots of narrow streets and alleys.  All very orderly, neat and tidy, with bicycles, motorbikes, cars and pedestrians all competing for road and parking space! 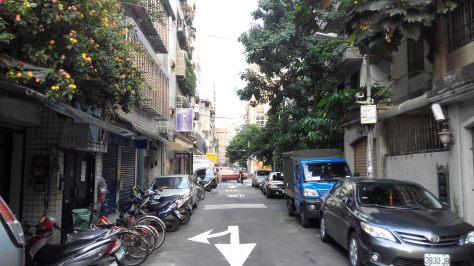 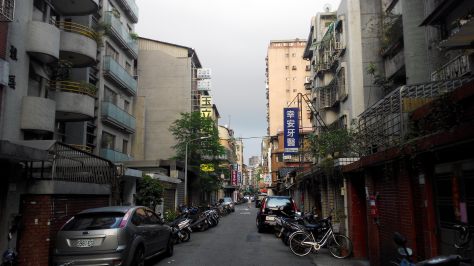 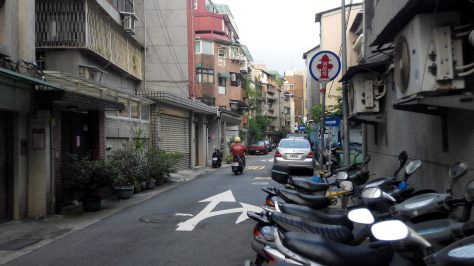 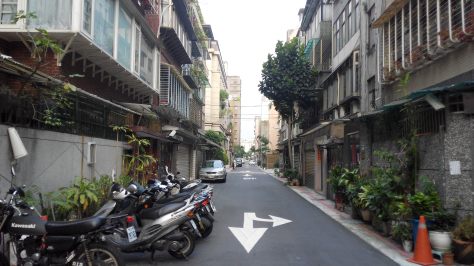 In case you’re wondering, these photos were taken last night about 6:00pm ~ hardly anybody out on the streets – the night is yet young, people not yet home from work. Wanna know where they all are?  Out on the main road….

“There are 15.09 million motorcycles in Taiwan, or 67.6 for every 100 people, according to the latest government figures.

A breakdown of the ownerships by region shows that the density is the highest in Kaohsiung, at 82.1 motorcycles for every 100 people, followed by Pingtung (81.9) and Taitung (78.4), the Directorate General of Budget, Accounting and Statistics (DGBAS) said.

The lowest is in Taipei, at 41.1 motorcycles for every 100 people, the DGBAS added.

And where’s all the rest of the people? Well, some are in the night markets!  This was Shilin Night Market over the weekend…

Please do pray for the people of Taiwan ~ 23 million on a small island, one of the most densely populated countries in the world….