And I had the chance to go too ~ YES YES YES!  Thank you St. James!

A non-stop 5 days in northern Vietnam, 33 of us, staff and their families from St. James’ Preschool, Taichung, and all happening only hours after the St. James’ Preschool Graduation. The graduation was on Wednesday night last week, and the very next day, Thursday, we all gathered, a bit bleary-eyed, at 5:00am for our big holiday trip….

OFF TO VIETNAM, YES!

To many people, Vietnam is associated with many negatives ~ war, prisons, communism, refugees and poverty.  Maybe the only positive is the food – especially noodles!  Sadly, yes, it does have a long and tragic history, particularly in the 20th century.  Wikipedia ‘Vietnam‘ gives a short summary here:

Vietnam was part of Imperial China for over a millennium, from 111 BC to AD 938. The Vietnamese became independent from Imperial China in 938, following the Vietnamese victory in the Battle of Bạch Đằng River. Successive Vietnamese royal dynasties flourished as the nation expanded geographically and politically into Southeast Asia, until the Indochina Peninsula was colonized by the French in the mid-19th century. Following a Japanese occupation in the 1940s, the Vietnamese fought French rule in the First Indochina War, eventually expelling the French in 1954. Thereafter, Vietnam was divided politically into two rival states, North and South Vietnam. Conflict between the two sides intensified, with heavy intervention from the United States, in what is known as the Vietnam War. The war ended with a North Vietnamese victory in 1975.

Vietnam was then unified under a communist government but remained impoverished and politically isolated. In 1986, the government initiated a series of economic and political reforms which began Vietnam’s path towards integration into the world economy. By 2000, it had established diplomatic relations with all nations. Since 2000, Vietnam’s economic growth rate has been among the highest in the world, and, in 2011, it had the highest Global Growth Generators Index among 11 major economies.

So with this in mind, off we went ~ to Taichung Airport for a 2½ hour flight to Hanoi, the capital, and described as the most atmospheric city in Asia.  It really is quite amazing, especially the Old Quarter and the old colonial buildings – so much YELLOW everywhere! The UK has a boringly grey Buckingham Palace, USA has the White House, but Vietnam has a mustard yellow colour for its Presidential Palace.  Just how different is that eh?!

Anyway, the 33 of us set off on our highly-organized and not-a-moment-to-spare tour, led by our lovely Vietnamese guide, A-Ming ~ and starting with Hanoi’s oldest Buddhist Pagoda and temple complex.  And that was all before lunch on the first day!

Actually the main reason for visiting northern Vietnam is really to go to Halong Bay, 4 hours by road east of Hanoi, one of the 7 natural wonders of the world, and a UNESCO World Heritage Site ~ there are thousands of limestone karst rocks sticking up out of the sea and covering a huge area.  Comparable to the scenery in Guilin, China, which is also karst limestone, but inland.  Halong Bay is just amazing, fantastic, incredible, and almost indescribable ~ and we spent the whole day on Friday there, on big boats, small boats, speedboats, climbing up hills, going down into caves and, well – just a bit of shopping, singing, talking and sleeping!  If you want to go to Halong Bay, better sooner rather than later ~ it is getting Developed-with-a-capital-D, with a roller coaster and fun fair being built right along the water’s edge to encourage people to stay longer – and spend more money!

And so to Saturday, back to Hanoi for an afternoon of sightseeing ~ the Confucius Temple, where it was very very hot and sultry with not a single breeze anywhere, the Ho Chi Minh Mausoleum – where they were changing the guard, and next door to the very bright yellow Presidential Palace, a ride through the Old Quarter to the R. C. Cathedral, built by the French in Gothic style (8% of Vietnamese are Christians, mostly R.C.), and a very lovely Water Puppet Show……

And on Sunday, a 3-hour drive S.E. of Hanoi to Tam Coc, in Ninh Binh Province, also zillions of karst outcrops, but these are jutting out of the land, and best seen from small rowing boats… it’s also very much still undeveloped, so lots of shopping opportunities – meaning everything is much cheaper down there!

And finally back to Hanoi for our farewell dinner – and birthday cake and birthday prayer for all those celebrating birthdays this month!

Hmm, well, I took over 2,000 photos during those 5 days, but fortunately you are spared seeing all of them!  Here is a selection of 99 of the best, to give you some idea of what a great time we had ~ a wonderful group of good friends of all ages ranging from about 15 to 80, the oldest (and needless to say the most energetic!) being the Rev. Charles C. T. Chen, our Rector Emeritus, who despite being hospitalized in intensive care in Iceland (yes, Iceland!) with a lung infection only last month, has now recovered back to his normal energetic self – look carefully at the photos and you will see him rowing hard, overtaking everyone… and you’ll not find a single photo anywhere of him resting! 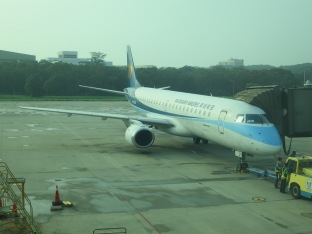 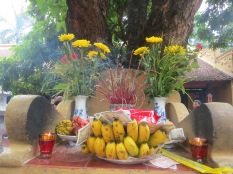 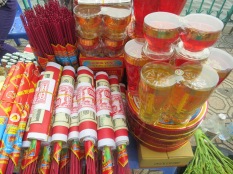 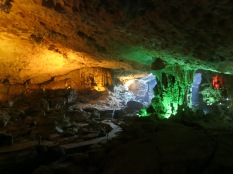 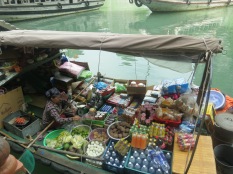 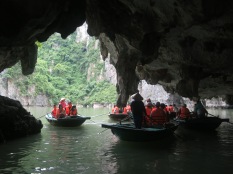 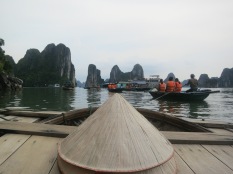 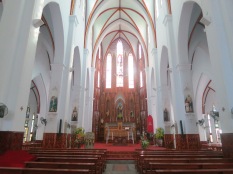 Vietnam really is an amazing country, totally unlike anything any of us expected!  The people are friendly ~ and they accept Taiwan dollars, yes!  They work hard too, after all, rice paddies are back-breaking to manage and it was the rice-planting season, so the fields were full of people bent double planting rice.  Temps were in the mid-30’s and they were there from dawn to dusk planting away.  And what wasn’t taken up with rice paddies was full of factories – many well-known Japanese, Korean and Taiwanese companies have huge factory complexes there including Sony, Samsung, Yamaha, Canon, and Foxconn / Hon Hai too.  It’s THE place to be!

We came home laden with cashew nuts, dried fruits, coffee, embroidered bags, fridge magnets, and of course our Vietnamese hats, giving thanks to Almighty God for a wonderful trip!

And guess what? On July 1, 2015, the Vietnamese Government kindly announced that UK citizens (plus a few other European countries) no longer need a visa for visiting Vietnam – so – no more excuses – GO GO GO – and the sooner the better, it’s a grand place!