Yes, introducing one of my most delightful former students, Amanda, who spent 2 years of her early life with us at St. James’ Kindergarten, Taichung ~ and she’s now a student of art history at Tainan National University of the Arts.  All grown up and going places!

This summer Amanda is an intern at the National Taiwan Museum in Taipei, another wow!  Her family are great friends of mine, and a few weeks ago, her mother took my visitors, Harriet and Nicky and me to visit the Rainbow Village in Taichung.  So with a bit of encouragement from Amanda’s mother, I popped in to see Amanda at the museum a few weeks ago.  And asked her if I could book her for an English Tour.  YES!

So here we are a few weeks later, and yesterday afternoon was THE tour!  I took along Tzu-Yang, Mark, our student from St. John’s University who’s been helping me these last few weeks with the English classes.  Mark has recently passed the government test in English to be a tour guide, so I thought this might be relevant to him too.  And it was!

As you can imagine, Amanda did an amazing job!  We had a whole 45 minutes of non-stop English, along with hand-drawn visual aids, explaining the history of the museum and the history of the building, which are 2 separate things. The history is here and says in the introduction….

The Museum, the oldest in Taiwan, was established in 1908. The Japanese government wanted to commemorate the opening of the North-South Mainline Railway and so established the Taiwan Viceroy’s Office Museum on October 24, 1908. In its early days, its collection boasted over 10,000 objects. In 1913, funds were collected to build the “Viceroy Kodama Gentaro and Chief Civil Administrator Goto Shinpei Memorial Museum.” In 1915, construction of the Museum’s new home was completed. It was one of the most noteworthy public buildings built by the Japanese colonial government in Taiwan.

So the building itself was not originally established to be a railway museum, rather a memorial to the previous viceroy and chief civil administrator of the Japanese colonial administration. So it oozes with Japanese colonial history mixed with European Classical style architecture and ancient Chinese tradition – outside are 2 massive bulls, there to help the feng-shui.

And here is Amanda in action!

Then when the KMT Government arrived from Mainland China in 1949, they removed many of the Japanese artifacts, including the 2 statues of the Viceroy and Chief Civil Administrator, so the statues are replaced by empty black vases.  Here’s one of them.  And us!

The building is quite impressive, really quite something.  You have to look up into the dome to appreciate it all.  In case you’re wondering how come it is built in such a classically European rather than traditional Japanese style, I gather the Japanese architects, Ichiro Nomura and Eiichi Araki had traveled widely in Europe and wanted to show the world that they could build something as impressive as all those European buildings they had seen. 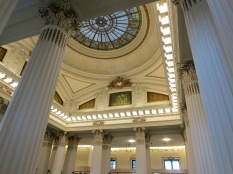 These days, it’s the place to go to learn about Taiwan’s anthropology, earth sciences, zoology, and botany, but that section will have to wait for another day!