Always accept a challenge!  And one of my challenges this week was to take 2 very lovely American teens around Taipei for the afternoon.  They were very interested and very keen to see everything!  Their parents were busy at a conference, so I offered to show them a few sights…

First stop was the Changing of the Guard at the Chiang Kai-Shek Memorial, whose days may be numbered, so it’s worth going to see now.  Not for the memorial itself but to see the guards. It’s hot work and they stand there totally not moving for a whole hour while the sweat drips off them.  Only one fan each blowing a bit of air around.  And they’re wearing tons of clothes.  Then they perform a wonderful choreographed display with their bayonets, every move coordinated with their fellow guards, as 2 of them change places. The place to stand to watch this is right in the centre in front of the statue.  Looks like this guard almost punched me in the face, he was that close!

Then walk down to the Presidential Office ….

And by MRT from Taipei Main Station to Taipei 101, which on a fine day is worth going up, or worth looking at from below.  It’s NT$ 600 for adults – which is not cheap so don’t bother if the weather isn’t good! I took my visitors up, and it was very empty up there – it used to be always full of Chinese tourists, but no more.  Fastest elevators in the world and all that.  Engineering heaven with that big ball up there that sways to steady the building in a typhoon or earthquake.  Video recordings on display of the ball swaying.  Check it out.

Taipei 101 is surrounded by construction sites, and some of the new buildings are amazingly high.  Pretty good views though!

But by far the most interesting new building in view from Taipei 101 is the construction of ‘Belgian architect Vincent Callebaut’s DNA double helix-shaped Agora Garden Tower’. Check out the Taiwan News article here for pictures of what it’s gonna look like when it’s finished.  Must go and visit it from ground level next time there’s a sunny day. Here it is below….

Finished at Taipei 101, and it’s time to eat – the food court on Taipei 101 Level B1 is good, and in the early evening midweek there’s not many people so you’ll easily get a seat.  By then it’s dark, and the only place left to go is of course a night market.  Shilin is the one to go to, and the must-see for teenagers is the live snakes – and the bottles of bits of dead snakes waiting to be made into soup.  No photos allowed though.

My visitors were staying in Nangang 南港 at the far eastern end of Taipei.  Full of businesses and office buildings. Not like the rest of Taipei at all.  I’d never been there before at night, in fact I’d hardly ever been there during the day come to that.  Full of colored lights, changing color all the time – this is the red look! 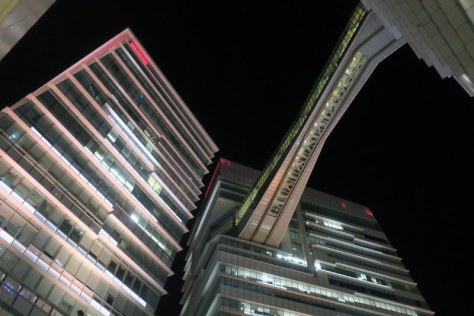 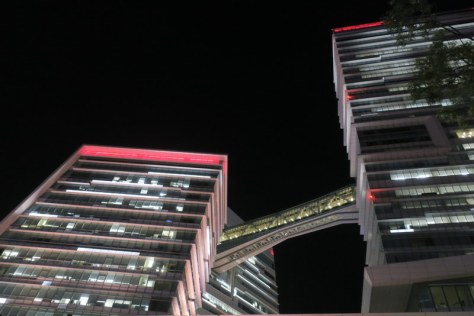 These Nangang photos were taken at 8:30 pm.  Still tons of lights on, people still at their desks!  From there it took me 2 hours to get home.  But hey, it’s so easy, just sit on a train and bus.  Taipei is just so convenient and easy and safe and worth seeing.  Morning, afternoon or night.  Tons of stuff to see and do.

So do come and check it out!

One thought on “Taipei 4 Teens!”