Ah, Northern Ireland – such a very green and pleasant land, where it rains so much that all it has to do is stop raining and everyone is upbeat and happy. A grey, cloudy and overcast day might put the rest of the world off from venturing outside, but not in N. Ireland. “Hey, it’s not raining, isn’t it great?” they say all day long. And it always is! Y’know, you just can’t fail to be charmed by the people and their attitude to the weather – in fact to the whole of life. Everyone is, well, oh so polite, every car stops before you’ve even arrived at the zebra crossing to let you cross, they hold doors open or stand back to let you through first, they offer you their seat if you want to look out of the train window, they all say ‘good morning’ and they spend their days talking to their friends on the street or phoning each up for a chat. There is a quaintness about N. Ireland that is so charmingly old-fashioned that you just have to smile at how lovely they are.  And what a sense of humour they have too….

Almost the first thing you hear on arrival in N. Ireland is how they haven’t got a government, but the last thing you see is any evidence of this fact. Everything works like it should. The trains and buses all run on time, and guess what, they even coordinate with each other. 😊 And N. Ireland people over 60 can travel on any bus or any train at any time to anywhere in N. Ireland completely free of charge, and at 65 they can do the same but all over the whole of Ireland too. This is really quite incredible. And all achieved without a government. Just imagine what the rest of the UK could do if they got rid of theirs!

My good friends, John and Margaret are real N. Ireland people, and they kindly invited me to visit them in Coleraine for a few days. This was my 3rd visit to N. Ireland, the last one being in 2010-ish, also to visit John and Margaret, and on that trip they took me to Giant’s Causeway and other famous places. In 2005, I had taken some of my Taiwan friends to visit them when they were CMSI (Church Mission Society Ireland) mission partners in Kenya and we all had such a great time together.  Ah yes, Kenya features a lot in their house in Coleraine!

Before Kenya, John was vicar at Lisburn Cathedral for 17 years, so they were well-placed to answer my endless questions about N. Ireland – on culture, history, religion, faith and of course pronunciation and meaning of places like Cullybackey, Ballymoney, Ballybogey, Ballygalley and Knocknamuckley – and those are just the ones I can remember, there’s plenty more I don’t even know where to start.  As I traveled around, place names were many, but people were surprisingly few. So, if I saw a whole crowd, I just had to take a photo – just check this out, this is a rare sight in N. Ireland! 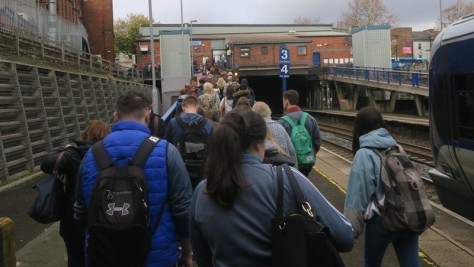 Margaret took me to visit Coleraine Town. It’s a grey town and it was a grey day, so it all added to the atmosphere. But being almost the only tourist in sight that day, the Tourist Information lady was delighted to have someone to talk to about the history, and she was wonderful. Like a ray of sunshine breaking through the greyness. I learned all about ‘The Honourable The Irish Society’ who were a group of merchants in London who were sent to N. Ireland on the orders of James I to establish a settlement in the early 1600’s, they developed the town and also built the church, St. Patrick’s, although it was built on top of the foundations of an earlier church, dating back to the 14th century. 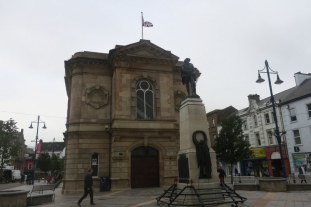 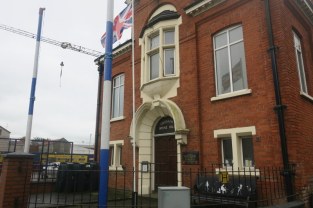 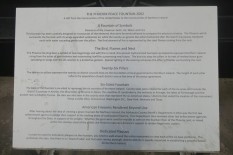 Needless to say, visiting Coleraine with Margaret was not the usual sightseeing tour. She knew most of the people we passed in the street, she took me into shops to meet her relatives who worked there, and of course when we got into the church, I was given a very warm welcome by more of her friends. Grey indeed outside, but inside, all was sunshine and warmth! 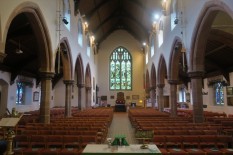 Later we drove out around the coast to Portstewart, Portrush and Dunluce Castle. “Hey, it’s not raining, isn’t it great?” said John all afternoon, smiling away. And it was!

We spent a day in Derry / Londonderry – going by train around the coast. It didn’t rain then, either, and yes, it was great!

My first visit to the famous city of Derry. Highly recommended. I’ve heard Derry described as ‘raw and beautiful’ and that kind of sums it all up. Very beautiful, with the most intact city walls of any city I’ve ever seen. A real walled city, full of history.

And in the walled city is the Church of Ireland (Anglican) St. Columb’s Cathedral, built between 1628-1633, the first post-Reformation Anglican church built in the British Isles and the first non-RC cathedral to be built in Western Europe… 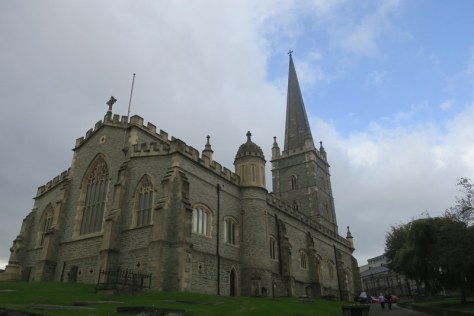 There’s a stained glass window in the church commemorating the life of Mrs. Cecil Frances Alexander (1818-1895), who was wife of Archbishop William Alexander of Derry. She wrote many famous hymns there, including ‘Once in Royal David’s City’ and ‘There is a Green Hill Far Away, outside the city walls’, the latter thought to have been inspired by the hills of the Derry, which are indeed outside the city walls… 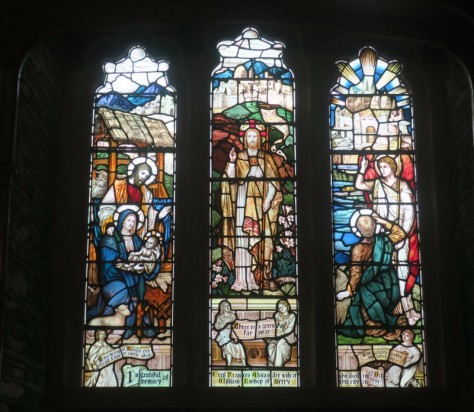 But Derry was severely affected by ‘The Troubles’. The conflict is widely considered to have begun in the city, with many regarding the Battle of the Bogside in 1969 as the beginning. Bogside is a majority Catholic / Irish republican area, and shares a border with the Protestant / Ulster loyalist enclave of the Fountain. From the city walls we could see both.

The ‘Bloody Sunday’ incident of 1972, when 14 protesters were killed by the British army, also occurred in the Bogside area of Derry, commemorated in this mural.

The Bogside Murals are famous, virtually all political rather than great works of art, and I spent ages taking photos of them all; they also mark the spots where many of the killings took place. This is the ‘raw’ side of Derry, raw, bleak and poignant. Many of the posters comment on the current political impasse and urge the leaders to get moving on settling the disputes…. 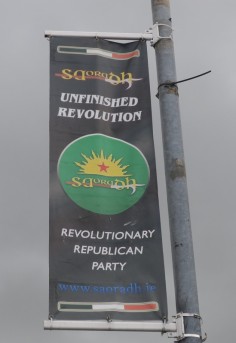 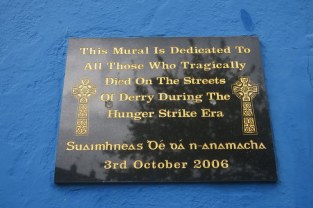 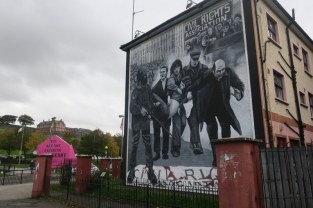 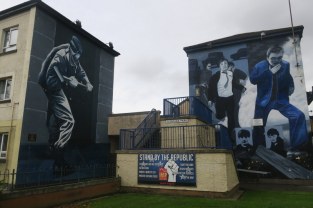 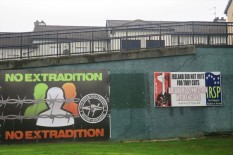 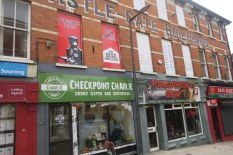 These days, tourists like me come to take photos of the wall murals, slogans and flags, described in this article here as ‘showrooms of ethnic antagonism’.  Sadly, centuries of mistrust and bitterness are ingrained in the hearts of the people on both sides. Despite the peace process and the Good Friday Agreement in 1998, society is still deeply divided. Geographically divided by public housing policies and educational practices, there are few opportunities for people to have meaningful contact with the other side. The 2 communities are close-knit, parochial, almost tribal ~ effectively living separate but parallel lives.

Certainly the churches are very divided. Church buildings are everywhere in N. Ireland, apparently there are 26 in Coleraine alone, many the result of breaking away from one of the others. Current issues in society – of abortion and same-sex marriage – have actually brought the churches closer together. But as John says, when it comes to N. Ireland Christianity, the Protestant Churches have placed way too much focus on the ‘way in’ and not nearly enough on the ‘way on’. The Christian faith has to be lived out day by day and while the churches argue and divide over doctrine, Brexit is on the horizon, secularism is on the rise and the church risks being side-lined, as is happening in England. N. Ireland has a long way to go. Prayer is needed!

On Thursday, we went to Belfast. I like the red-bricked buildings of Queen’s University… 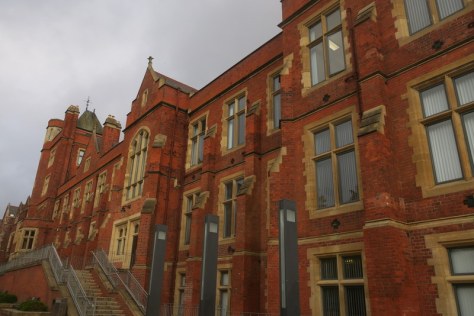 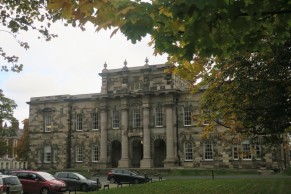 we also visited the botanic gardens…

and the Ulster Museum… 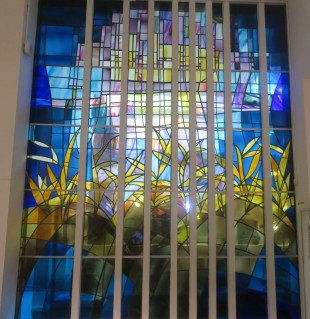 Then we walked down to the city centre along Sandy Row, traditionally a staunchly loyalist, predominantly Protestant, working-class area of Belfast. The huge wall mural at the entrance to the street commemorates King William III of England who travelled along Sandy Row with his troops on his way south to fight at the Battle of the Boyne in 1690, a defining moment in Irish history that ultimately ensured Protestant ascendancy in Ireland, and is commemorated on July 12 each year by the Orange Order with huge parades and bonfires. Pictures and flags of the queen, union jacks and slogans of support for Britain are everywhere. It is all really quite surreal. One thing is certain, 4 days in N. Ireland isn’t anywhere near enough to even scrape the surface in understanding the complex situation that is Northern Ireland today. 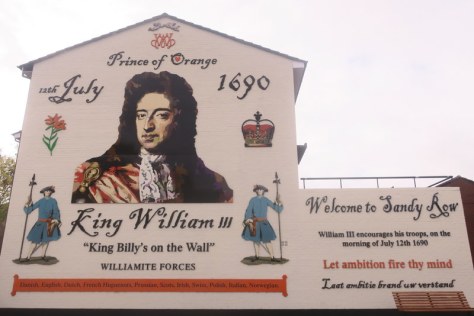 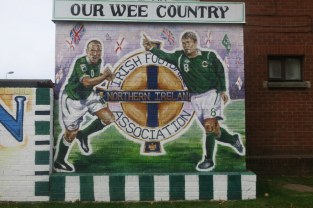 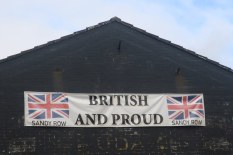 And on into Belfast City Centre – to the city hall and around about.  Not enough time to go everywhere ~ still we saw a little of this great city! 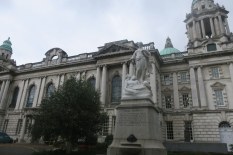 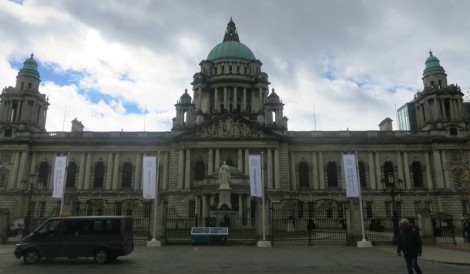 The sign said, ‘Ask not what you can do for your country, ask what is for lunch’ 😊 And so we went off to meet my old friend, Ali and her husband, Chris – for lunch. Once upon a time, Ali and I taught together in Mwanza, Tanzania; now she lives in Newtonards, where Chris is the vicar. Her accent sounds really Irish to me, but all the locals say she sounds very English. Actually she’s from Suffolk!

A very very huge thank you to John and Margaret for their wonderful welcome and amazing hospitality, and to Ali and Chris and all the lovely people of N. Ireland too for their warm welcome. Sorry not to be able to visit everybody I would have liked to – ah, next time, next time!  And next time for shopping too…. 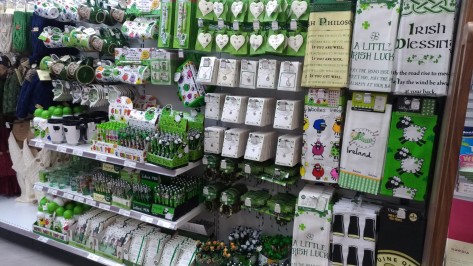 And on Thursday afternoon, on our way back to Coleraine, finally, it rained. Ah, rain at last! I’d been in N. Ireland for 4 days, and saw no actual rain until my final day. All 5 minutes of it, enough for cars to use their windscreen wipers. John was delighted, “so finally you can see some real Irish rain!” YES!  A trip to N. Ireland is not complete without some wet stuff to make you feel welcome. So they say, anyway. 😊😊

Goodbye N. Ireland – until next time.  And so to Belfast Airport this morning for my short flight back to Manchester.

Ah it was fun trip ~ I just LOVE Northern Ireland!