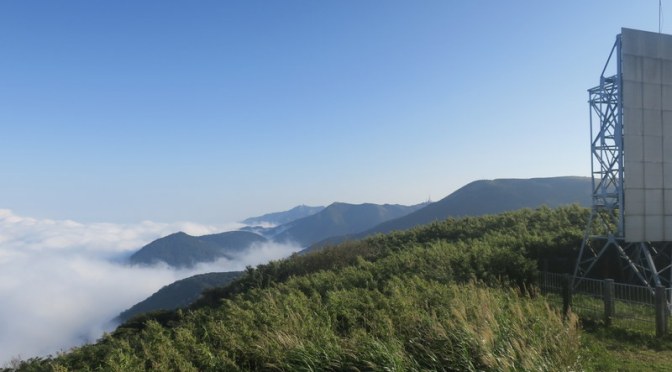 Yesterday was THE day!  The weather forecast was sunny, warm and dry, it was a very rare free Saturday and the beautiful Yang-ming Shan Mountains above Taipei were calling.   At 7:00 am, it was just light as I set off on the trail upwards into the clouds, complete with gloves for the roped sections ahead, and plenty of coffee to keep me going.  Ever hopeful that the forecast would be right, I ventured forth – and so it turned out to be, at the top of Mt. Miantian 面天山 (977 m) where there are 2 huge microwave reflectors, I could look down onto a massive and beautiful sea of white clouds covering the whole of the northern coast, including St. John’s University and most of Taipei City.  Misty memories came back of the last time I was on Yang-ming Shan at the end of October 2019 to do the ‘陽明山東西大縱走活動’ ‘Yang-mIng Shan East-West Traverse’ ~ a killer hike and yes, mostly done in the mist. Yesterday turned out to be beautiful weather all day – cloud down below, blue sky above. And so the good weather continued – onto the summits of Mt. Datun 大屯山, Datun west, south and main peaks. The skies were blue, the clouds were white and the views were incredible.

And there were hardly any people.  Usually on a sunny Saturday all through the year there will be thousands of people on Yang-ming Shan hiking, walking, enjoying the hot springs, relaxing with family and friends.  After all, it is just so easy to get there from Taipei City by car or public transport, so there is really no excuse for NOT going!  But not yesterday.  It’s true that one of the roads was closed for repair after recent heavy rains, but even so, there were hardly any people anywhere to be seen.  Even Erziping with its famous lake and picnic site in the swirling mists had only a few people there…

Later, I did find out that one of my friends was following the same route as me, but a bit later in the morning – and by the time she got there at lunchtime, the sea of clouds had dispersed a bit.  And it was a bit of a surprise to bump into one of my adult students on the top of Mt. Datun, although Yang-ming Shan is that kind of place – anyway, it’s her who kindly took this photo ha ha!

And the reason for there not being many people up in the mountains?  Election Day!  Down in Taipei and all over the country, people were lining up since 7:00 am to get in and vote in Taiwan’s 2020 Presidential and Legislative Elections.  Campaigning has been going for months, and it couldn’t be livelier.  Billboards, loudspeakers, TV appearances, campaign rallies, it’s been pretty non-stop all day long, and they cover every aspect – so it is impossible not to be involved.  Held once every 4 years, Taiwan’s President Tsai Ing-wen (蔡英文) of the Democratic Progressive Party (DPP) was standing for a second term.

Taiwan has no postal voting or voting by proxy, so the 14 million citizens who were qualified to vote had to travel home to the place of their household registration, which meant a mass exodus out of Taipei for the weekend.  St. John’s University and all other universities finished their term on Friday, allowing students to return home to vote.  Thousands more came home from overseas, combining the election with a pre-Chinese New Year visit to family and friends.  Democracy and the right to vote are cherished, and the level of enthusiasm was clear.  Yes, it was a very BIG day for Taiwan!

Thankfully voting went peacefully, and by early evening, it was clear that President Tsai had won a second term.  She received 8.2 million votes, 57% of the ballot, which is over a million more votes than she got first-time round in 2016. Her main rival, Kaohsiung Mayor Han Kuo-yu (韓國瑜) of the Chinese Nationalist Party (KMT) won 5.5 million votes, 38 % of the ballot.  The DPP also won a majority of seats in the Legislature with 61 seats, the KMT took 38, and smaller parties took the remaining 14.

We give thanks to God for safe and smooth elections yesterday, and please do keep President Tsai and her government in your prayers as she starts a second term. For more information, see the following news reports:

And Taiwan’s next big event, coming up soon: Chinese New Year! Spring is coming too. The cherry blossom was coming out yesterday, and there are ponkan trees everywhere covered in fruits…

4 thoughts on “Above the Sea of Clouds: Taiwan’s Elections from afar…”