This is definitely my new favourite thing to do in the Greater Taipei area!  Must-go, must-see, must-ride on that train!  Just look at the kind of view you’ll have!

Two weeks ago, the day after Typhoon Nepartak, in a mix of drizzle, rain, torrential rain, and overcast skies, with my 2 lovely visitors from the UK and 4 of our wonderful students, I spent the day on the Pingxi Line, and it was fun!  It was cool after the typhoon, but dull and overcast.  On that day we spent all our time at Shifen 十分, and then went to Jiufen 九份.  But that was really my first time to visit the area other than at the Lantern Festival, so I just had to go back and find out what is really possible in a whole day.  All for the benefit of you guys and all my future visitors lol!

The Pingxi 平溪 area is set in the forested mountains east of Taipei, and the Pingxi Train Line is an old coal line, used to take coal and miners back and forth, but now used to shunt us visitors back and forth instead.  The coal mines were at their height during the Japanese era, particularly from the 1920’s onwards, but started to decline in the 1990’s. Now the mines are long gone, but the old mines, buildings and mining towns remain. Each town along the line has it’s own ‘Old Street’, and there’s plenty of opportunities at each town to write your prayers and wishes on your own sky lantern and send it skywards and heavenwards. The sky lanterns started originally in the days of raids by bandits ~ the lanterns would be lit to send notice to the local people hiding in the hills around, announcing the good news that their town was safe again after the bandits had gone. These days, local children and anyone finding a deceased and fallen sky lantern can get some money if they return it to the town.  It’s kinda of recycling.  Good idea – cos the fallen sky lanterns are everywhere, fortunately there’s no farm animals in the area. 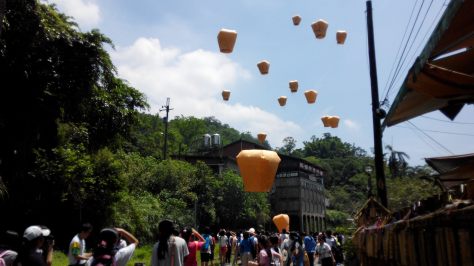 There’s also plenty of wishing bamboo sticks on which to write your wishes too….

I just love places where’s there’s something to do other than just eating and shopping!

There’s one train an hour on the Pingxi Line, so timing is everything.  My plan was to go to the furthest point, and work backwards, spending an hour each in the 4 main places, Jingtong 菁桐, Pingxi 平溪, Shifen 十分 and Houtong 猴硐.  It worked!  There’s enough to see in each tiny place to fill an hour without the time going too slow or too fast.  The only place where I spent 2 hours was at Shifen 十分 in order to also visit the famous waterfall.

Of course, there are quicker ways to reach Pingxi than by train – there’s buses from Taipei to Ruifang, and another bus all the way to Pingxi, but the train is wonderful, even if it does take ages to get there!

And so it was that even though I left Sanzhi at 5:20 am yesterday morning, by bus to Tamsui, MRT to Taipei Station, train to Ruifang and then the Pingxi train, it took 5 long hours! Mostly because of having to wait 30 minutes at Taipei Main Station, and another 40 minutes at Ruifang.  At Ruifang 瑞芳, it’s worth buying the day ticket on the Pingxi Line at NT$ 80, it means you can go anywhere and everywhere all day long, so it’s cheaper even than using the YoYo Card if you plan to make a lot of journeys.

So at 9:10 am, there I was on the Pingxi Line train leaving Ruifang, and heading to the end of the line at Jingtong 菁桐.  Wonderful!  Jingtong has got the most character of all the towns along the line, with a very Japanese colonial feel about it, especially the train station.  And there’s wishing bamboos hanging everywhere, I have photos galore!  The trip takes an hour, and as it was early, the place was quiet and calm.  Actually compared with Jiufen, the whole area is quiet and calm!  There are no huge tour groups anywhere, the largest groups were teenagers lighting sky lanterns. Most of the visitors are from Hong Kong and S. Korea, and all are very polite and lovely!  The police station is built like a huge sky lantern and is lit up at night, and looks beautiful, so everyone says.  But night was 10 hours away, so I’ll just have to come back another time! 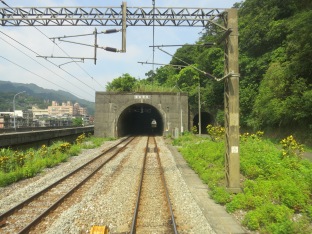 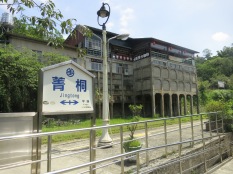 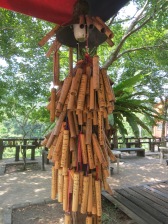 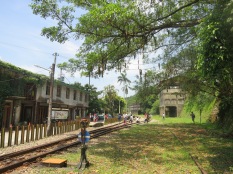 Exactly one hour later, and there I was in the very front of the next train heading down to Pingxi.  This is the most famous of all the towns in the area, and gives its name to the railway line.  Famous sausages, ice-cream, and a beautiful mural on the wall of the post office.  The train goes over a high bridge at Pingxi, worth standing there to take a photo! 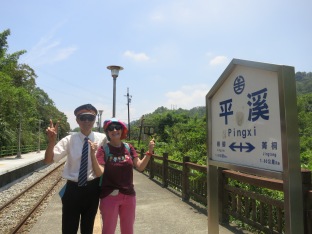 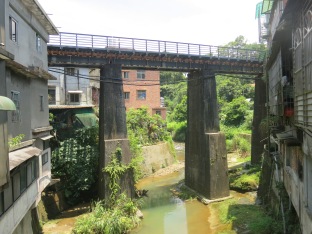 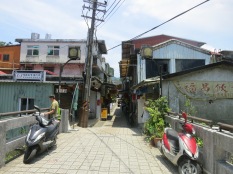 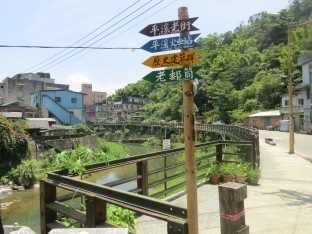 Another hour later, and there I was, also in prime position, front seat, next to the driver, for the trip down to Shifen.  Shifen was where we came 2 weeks ago, and it’s famous cos of how the railway line goes between the 2 rows of houses, which is where everyone lights their sky lanterns. Tons and tons of people.  Shifen also has a famous waterfall, the broadest in Taiwan and worth it to go and check it out. But by then it was early afternoon, and boiling hot. The actual waterfall is set among trees and shade, but the 20-30 minute walk to it is in the hot hot sun.   But hey, you must still go, it’s beautiful! 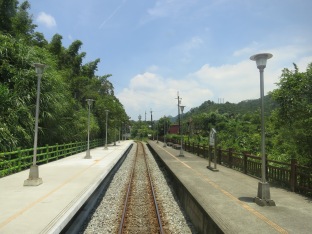 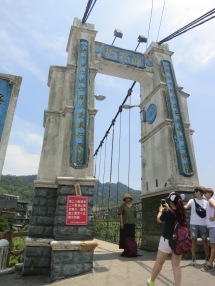 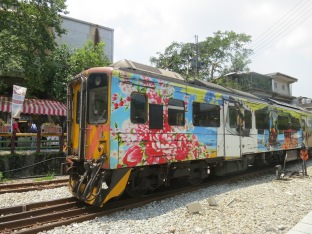 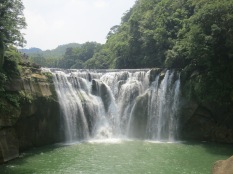 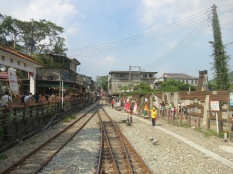 And so back to the train for my last stop, Houtong. The town is not only on the Pingxi Line but also on the main line down the east coast. Out of all the mining towns in this area, this one has the most obvious mining ruins and derelict buildings lying about in the main town.  There’s a stunning bridge that was to transport the coal to the coal-dressing plant.

But these days, Houtong has re-invented itself as the Houtong Cat Village and if you like cats, this is the place for you.  There’s a special enclosed bridge over the railway, filled with cat boxes.  And cats.  In fact, everywhere is filled with cat boxes and cats.  The village is worth seeing even if you don’t like cats, as all the people still live there in houses that sit at different levels on the mountain side.  Yes, the place is full of cats.  It’s really quite an amazing place.  And, well, guess you’ll either love it or hate it! 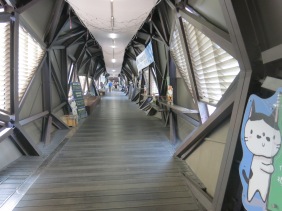 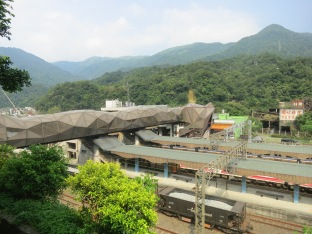 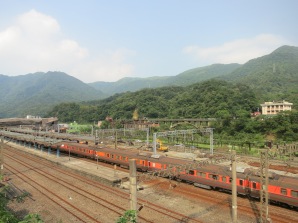 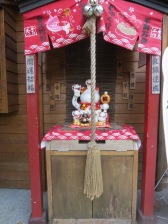 And that took me to 4:00 pm, and time to return home, 4 hours away ~ and every train and every bus full of people!   But y’know, it was a fun day, and I learned a lot.  Now I’m all ready for my next set of visitors.

And from now on, after Tamsui and the northern coast, the Pingxi Line is gonna be Number 1 on my list of must-see places in the Greater Taipei area ~ YAY!