Yes, at last, I’ve found them!  The cattle of YangMingShan are smelt long before they are seen ~ the smell of ‘cow’ is everywhere in Qingtiangang especially on the grasslands, and there’s cowpats and muddy trails and hoof-prints all over.  But often the cattle themselves are nowhere to be found.  I’ve been up there twice recently and not a cow in sight.  But yesterday, there they all were, taking it easy – with the egrets perched on their backs, chewing the cud, yes!

YangMingShan is the mountain range on the northern side of Taipei City, highest point 1,120m above sea level, all volcanic in origin, with lots of sulfur deposits, fumaroles, hot springs, and in spring, cherry blossom.  From 1895-1945, Taiwan was under Japanese rule, and in 1937, the Japanese government declared the western part of YangMingShan around the Datun Mountain area as a national park. Much of the area was already being reforested, and the trails that we all use today were established at that time running along in-between the firebreaks.  And beautiful trails they are too!

The eastern part of YangMingShan, around Qingtiangang and further east to Fenggueikou, was used for tea-growing and grazing cattle.  In 1934, the Farmer’s Association of Taipei established a cattle ranch there, covering about 2,000 hectares, with about 1,600 cattle. This was disrupted during World War II, and even though farming was continued under the Chinese government after the war, it continued to decline. In 1985, Qingtiangang became part of the national park.  This was the site of the old farm office, near the Juansi Waterfall (‘Silk Waterfall’, because the water looks like spun silk) now derelict….

The cattle of YangMingShan today are of 2 types, Taiwan Water Buffalo and Tajima Cattle (a strain of Japanese Black).  In January 2017, former president of Taiwan, Lee Teng-Hui, who has a PhD in Agricultural Economics, announced a project to produce Japanese-style beef using Taiwanese cattle through experimental breeding techniques, using Tajima cattle from YangMingShan – though the report says the Tajima were underweight when they arrived at the research station.  No wonder, living up there, especially in winter! There’s one Tajima in the centre of this group…. 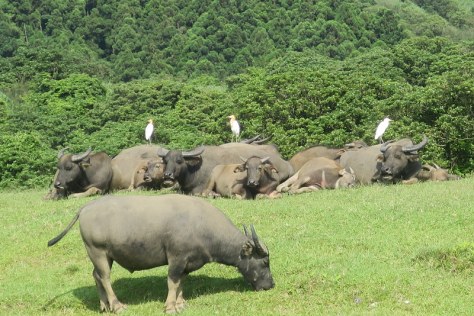 The water buffalo are black in colour with large curved horns, in a crescent shape. The horns of the Tajima are smaller and shorter and straighter.  They all hang out together, and due to the heat can often be found sitting around taking it easy, chewing the cud or indulging in a bit of mud-bath therapy, keeping cool.  This is how they were yesterday!

The cattle area and grasslands extend for miles all the way along the ridge to Fengguikou. Beautiful scenery all the way and glorious views! 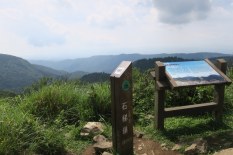 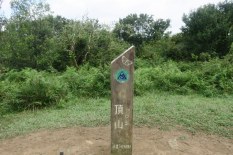 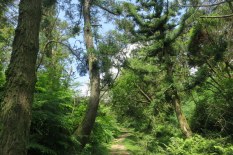 And how’s this for the view north towards the coast…. that’s the sea in the distance!

Great place, and those cows are something else – the ones in the mud-bath could be heard long before I could see them, wallowing and blowing bubbles.  Just like hippos in the Serengeti!

2 thoughts on “The Cattle of YangMingShan 陽明山, Taipei”