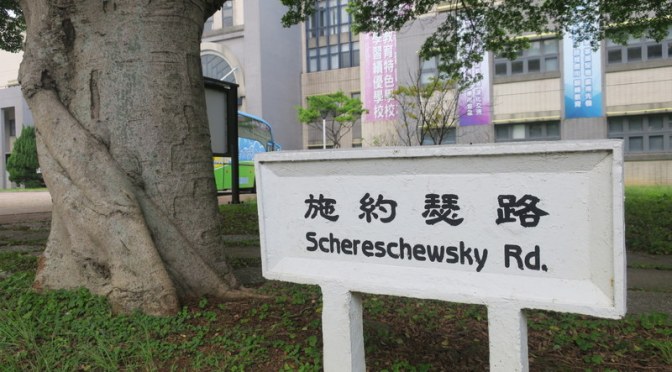 Bishop Samuel Isaac Joseph Schereschewsky (施約瑟 6 May 1831 – 15 October 1906) was quite an amazing man (his surname is quite amazing too – extra points if you can pronounce and spell it correctly!) His testimony, ministry as Bishop of Shanghai and founder of what became St. John’s University, Shanghai, plus his work on Bible translation into Chinese, all these are well-known here at St. John’s University (SJU), Taiwan. Hence the front of our SJU campus has a road named in his honour (see above photo, taken this morning). And the Bible he translated is one that we give as gifts to VIP guests (eg SJU 52nd anniversary celebrations, April 2019).

HIs life story was published in a Facebook post of the Anglican Asia Magazine @ Anglican Communion, yesterday, October 14, 2020…

‘COMMEMORATION OF BISHOP SCHERESCHEWSKY OF SHANGHAI’

‘Today we commemorate the life and ministry of the Rt. Rev. Samuel Isaac Joseph Schereschewsky, Third Missionary Bishop of Shanghai (1877-1883) for the Episcopal Church Mission in China, Bible translator, and founder of the former St. John’s University (聖約翰科技大學) in Shanghai (now located in Taiwan). He departed this life on 15 October 1906.

The story of Bishop Joseph Schereschewsky’s life and ministry is a uniquely inspiring one. He was born in 1831 of Jewish parents in the Baltic state of Lithuania in Eastern Europe, with his early education intended to prepare him to become a Jewish rabbi. However, while in Germany pursuing graduate studies he became interested in Christianity through missionaries of the Church of England affiliated Church’s Ministry Among Jewish People (CMJ), and through his own reading of a Hebrew translation of the New Testament. In 1854 he migrated to the United States to study at the Pittsburgh Theological Seminary in Pennsylvania in preparation for ministry in the Presbyterian Church (USA), however during this time he was drawn to the Episcopal Church and completed his theological education at the General Theological Seminary in New York City.

After being ordained deacon in the Diocese of New York in 1859 by the Rt. Rev. William Boone, First Missionary Bishop of Shanghai with jurisdiction over China, Schereschewsky accepted the call to join him as a missionary. A talented linguist, he quickly began learning to write Chinese during the long sea voyage from the United States. From 1862 to 1875 he ministered in the capital Beijing, translating the Bible and parts of the Book of Common Prayer into the Mandarin language. After the Rt. Rev. Channing Moore Williams, Second Missionary Bishop of Shanghai, departed for Japan as the First Missionary Bishop of Edo (Tokyo) in 1874, Schereschewsky was elected to succeed him. As bishop, he established St. John’s University (聖約翰科技大學) in Shanghai (now located in Taiwan), and began his translation of the Bible and other works into formal Classical Chinese known by missionaries as Wenli.

By 1883 Bishop Schereschewsky was forced to resign as bishop and return to the United States because of his deteriorating health due to Parkinson’s disease and almost complete paralysis, but he was determined to continue his translation work. After many difficulties in finding support he was able to return to Shanghai in 1895. He later moved to Tokyo to begin translation work for the Anglican Church in Japan (日本聖公会) while continuing his devotion to the Chinese language assisted by Japanese and Chinese secretaries. After a decade in Japan, he would finally succumb to his illness on 15 October 1906 at the age of 75. With heroic perseverance Bishop Schereschewsky completed his Wenli translation of the Bible, managing to type 2000 pages with the middle finger of his partially crippled hand. Four years before his death, he said, “I have sat in this chair for over twenty years. It seemed very hard at first. But God knew best. He kept me for the work for which I am best fitted.” He is buried in the foreign section of Aoyama Cemetery (青山霊園) in Tokyo next to his wife, Mrs. Susan Mary Schereschewsky (nee Waring), who supported him constantly during his labours and illness.

The legacy of Bishop Schereschewsky’s dedication to Bible translation in to the languages of the people he ministered to continues on in to the current generation through the Nanjing-based Amity Foundation, founded in 1985 by Bishop Kuang-hsun Ting, the last Anglican bishop in mainland China. Today its printing press, in partnership with the United Kingdom-based United Bible Societies, publishes bibles in 10 Chinese languages as well as in 90 other languages and exporting to 70 different countries.

The last meeting of the House of Bishops and General Synod of the Anglican Church in China (中華聖公會) was held in Shanghai in 1956 before being forcefully merged by the Chinese Communist Party with China’s other Protestant churches in to the Three-Self Patriotic Movement of which Bishop Ting would become chairman. Later upon the establishment of the China Christian Council in 1980 as the only government-sanctioned organisation of Protestant Christians in addition to the Three-Self Patriotic Movement, Bishop Ting would become its founding president. He departed this life in 2012 at the age of 98.’

One thought on “‘Commemoration of Bishop Schereschewsky of Shanghai’”